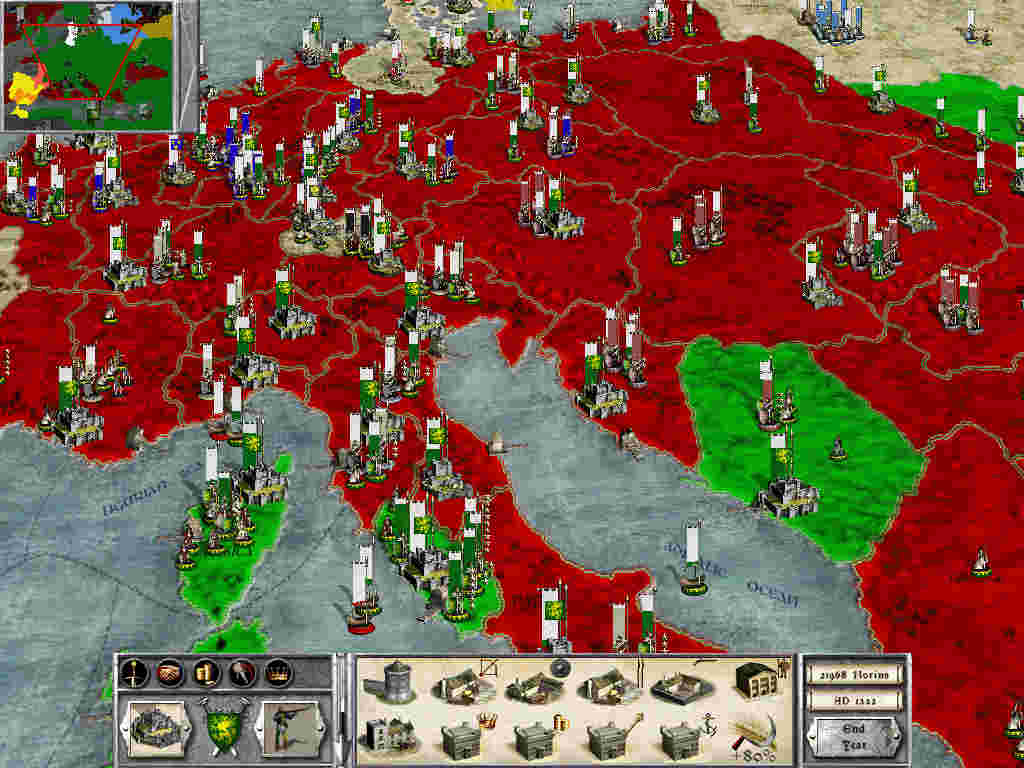 I love strategy games. Ever since the first Command & Conquer and later on Shogun: Total War, I was deeply in love with strategies, both the quick, twitch based RTS titles like Warcraft or Starcraft, as well as the “deeper” strategies such as Europa Universalis, Master of Orion or any Total War title. RTS, turn-based, real time or grand strategy, give them to me, all of them, right now! However, I must admit that I like prolonged, thoughtful grand strategies that sometimes require days or even weeks for a single game to be finished.

However, there is one issue with most of the grand strategies; the endgame is absolutely broken.

It is quite weird that this is an issue that is most often overlooked. While the games are still in the testing phase, you can rest assured that the all possible bugs and/or imbalances that appear early on in gameplay will be quickly fixed and corrected, unlike those that appear later in the game. It is only logical, of course, that both game testers as well eventually the gaming audience are more likely to encounter problems at the beginning of the gameplay then they will alter on in the final stages. Let us not forget that a majority people will stop playing the game (or churn, as the professional gaming/marketing term goes) before going truly deep into the strategy content in order to see the problems that are deeper in the game.

In RTS games, with scripted campaigns, you rarely get to carry over the units to the next mission, let alone your strategic conquests or previously gathered resources. Also, with every new mission within the game, the starting position is designed to be as demanding as possible, but without the advantage from the previous missions. It is, in effect, a series of independent games. The endgame here is nothing but a separate mission, a mini-game in itself.

Grand strategy games are entirely different. Essentially, as you begin a new grand strategy game, you will have a continuous flow of events from the very first second to the very end of the game; whatever you do in the “early game”, it will carry over and influence your future progress – or the lack thereof. Your strategic and tactical decisions matter to your overall success. All your economical, diplomatic and military decision have long-term consequences. The conquered areas, enemies you’ve made, the alliances you forged, it all accumulates toward your specific, final outcome.

And herein lies the greatest problem of Grand Strategy Endgame; the moment when you, as a human player, have become all-powerful, Godlike entity that is steamrolling everything in your path, the game loses almost all of its appeal. You are just sitting there, automatically building armies or ships or buildings in your provinces/worlds, waiting for the inevitable victory.

The thrill is gone.

Surprisingly enough, a vast majority of strategy games chooses to ignore this issue, except for couple of honorable exception that I am about to list here. They just accept that part of the game as something inevitable, but the rarest of them are trying to do something about it.

Do you want Total War!?!

I must admit – I am a sucker for the Total War series. I like building stuff on strategic level; I love sending my troops to raze enemy provinces, conquer cities and annihilate enemy armies on tactical level. Creative Assembly has tried to implement some systems to offset the endgame that were interesting, even if not always entirely successful. As far as I can recall, the first – even if somewhat tentative – example of that was being done in Medieval Total War, the second TW game and the first one set in the middle ages setting.
What they tried was an implementation of random rebellions and uprisings that followed a death of a king without a strong heir. In one of such games, where I was in charge of almost all territory on the map. Suddenly, my king dies and I have rebel armies spawning in at least 90% of my provinces. In that year alone, I must have fought at least 50-60 battles in the first year alone, and those lasted for hours and hours. (NOTE: Blessed are the times when I could do that without worrying about a ton other stuff, like work, bills, deadlines et cetera!)

As far as I can recall, these events were rather random and, well, unrealistic. The armies that would spawn even from the poorest of provinces would be of highest possible tech, on the level that not even I as the ruler of the most advanced empire had access to yet. Overall, this system was a crutch, and not a very reliable one, but I salute the initial attempt to address the problem nonetheless.

Creative Assembly went a step further with a Shogun 2: Total War with a feature that was far better thought out and implemented. The system was called “Realm Divide”, an event that would trigger once certain circumstances would come to pass. Overall, once the player would gather sufficient momentum to overrun everyone else or you became sufficiently strong and popular to threaten everyone on the map, a real divide event would trigger, where all of the remaining provinces would unite in the battle against the player. Along the lines of the Medieval TW fix, but still one of the more popular attempts to offset the pitiful endgame of grand strategy games.

There is a game that absolutely enchanted me when it came to keeping the balance of power to the point it felt almost real, and that is Europa Universalis IV. Unlike majority of other strategies, EU IV had systems in place that made advancement in the game really difficult. Just when you thought you got it made, you conquered your first couple of enemies and feel like the king of the hill (and of course continuing to devour smaller neighbors) because nobody else around you is a threat, when suddenly you have a coalition emerging to fight against you. The conquered provinces also tend to easily rise in rebellion, whereas in other games one has sufficiently resources and morale increasing buildings to quickly make the subjugated nation feel like they were with you all along. Even if you tried to play it smart and would set on conquest by annexing or otherwise politically bullying countries into doing your bidding, it wouldn’t work as well, because the AI countries would become aware of your desires for conquest and ally against the vicious expansionist. This feature of negative attitude the AI factions get against expansionists is extremely valuable trait in the game and should be used more often in all types of grand strategy games.

One of the finest and deepest strategy games ever made.

But what Stellaris, the space 4x game from Paradox, is going to do in this regard could easily be declared as evolutionary. Not only that they acknowledge the problem, they developed an entire system around it. Canßt say I am surprised, since Stellaris is being done by the people who worked on Europa Universalis.

Some of the systems described were, for example, an event of robot uprising. if the player keeps developing finer and finer AI, it can easily happen that at some point it comes to a rebellion of our mechanical servants. Suddenly an empire that had no equal is being torn apart be inner turmoil and civil war. Another one was an event where a race that developed new, amazing ways of space travel would actually tear a hole in reality, and aliens from another dimension would spill into ours, bent on destroying all living life here (Species 8472, anyone?). Or, as a third option, one or two of old races would reemerge and either wiping everyone from the face of history or simply start fighting against each other, with lesser space races being boxed down between them.

Games like Europa Universalis IV and Stellaris are definitely on the right path. The solution is to provide different techniques for endgame rather than the usual strategy games have employed so far, which is “more of everything!”. The difficulty should change its nature, not its degree as the player advances; let us say that the player has dangerous external enemies at the beginning, which prevent any serious development of internal conflicts. By the time most of external enemies have become insignificant and too weak to endanger the player, internal conflicts should rise and the player should be forced to spend much more time in keeping his empire from falling apart. Introducing some external challenges is also good, but should take second seat to “balancing the gameplay from within”. The player should be challenged to change his playstyle according to the circumstances and be prevented from entering the “steamrolling phase” all too easily.

Let us hope that the future grand strategy games will show even more appreciation from developers when it comes to fixing the endgame and providing our beloved strateg titles with more longevity!