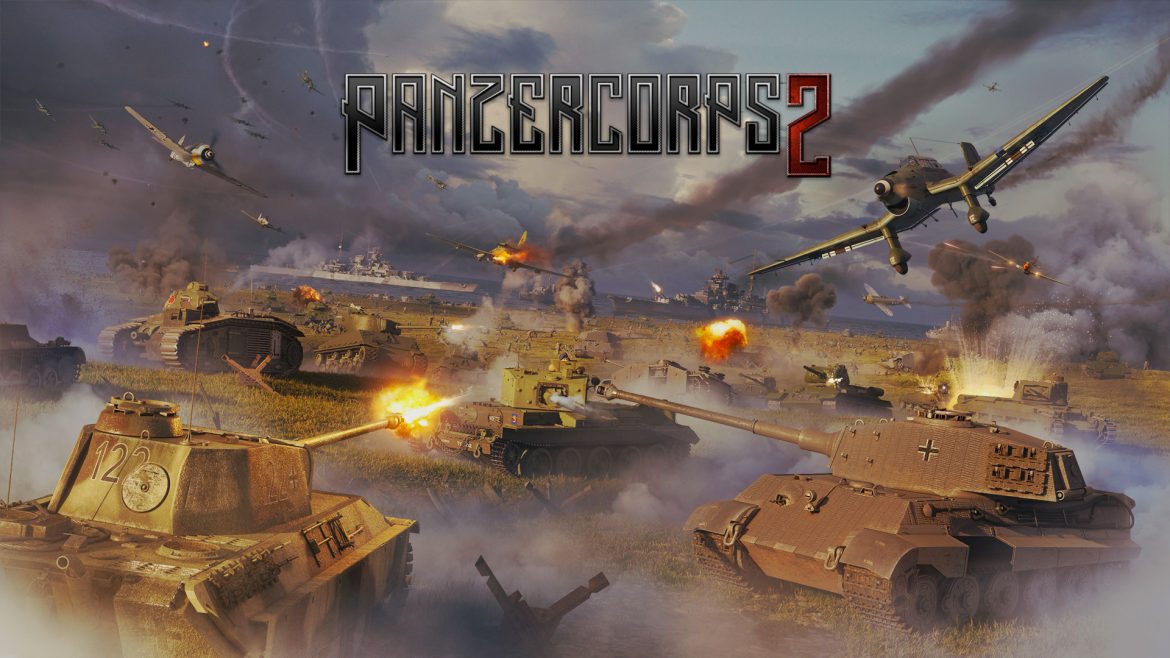 Just as I was finishing up the preview of Panzer Corps 2 I got a surprising message from Slitherine folks who, in the outmost kindness of their heart, have provided me with a full version of the game. The special honor in it lies in the fact that I got the press version of the game to test and review 24 hours before everybody else! So, that meant for me that I had to go back to the game right away and continue my play through, which I enjoyed pretty much!

I played Panzer Corps 2 for some 7-8 hours overall, which is nowhere near enough to extract the full joy of the game but definitely sufficient to get well familiar with the core gameplay and all its intrinsic features. More importantly, it is enough time to find out if I love the game or not. And, spoiler alert, I do. Very much so!

This version does not have a multiplayer yet and there are some other small features that are missing, but the campaigns and scenarios are included and, perhaps most importantly when compared to the preview version, a 60 minutes long soundtrack has been introduced to the game. I can say that overall sound effects have been done quite well, that they fit well into the atmosphere of turn-based strategy games of this type and the music enhances the action and the dynamic of the game in a meaningful, yet non-intrusive manner. The sole exception may be the background music in the main menu, but that too is only because I had to record my sessions and find the right balance between microphone volume and in game music volume.

I must admit its been a long while since I played Panzer Corps, but I reinstalled the game after playing this preview copy (which expires within several days) to tie myself over until the release date of PC 2. Now that I have a full version I know exactly what I will be doing next several days!

At the start of the campaign you need to design your very own general, assigning yourself yourself specific strengths and weaknesses. For each strength you assign, such as infantry or panzer general, liberator, flexible command etc., each of these giving you a specific bonus you also get a weakness which is a negative bonus. 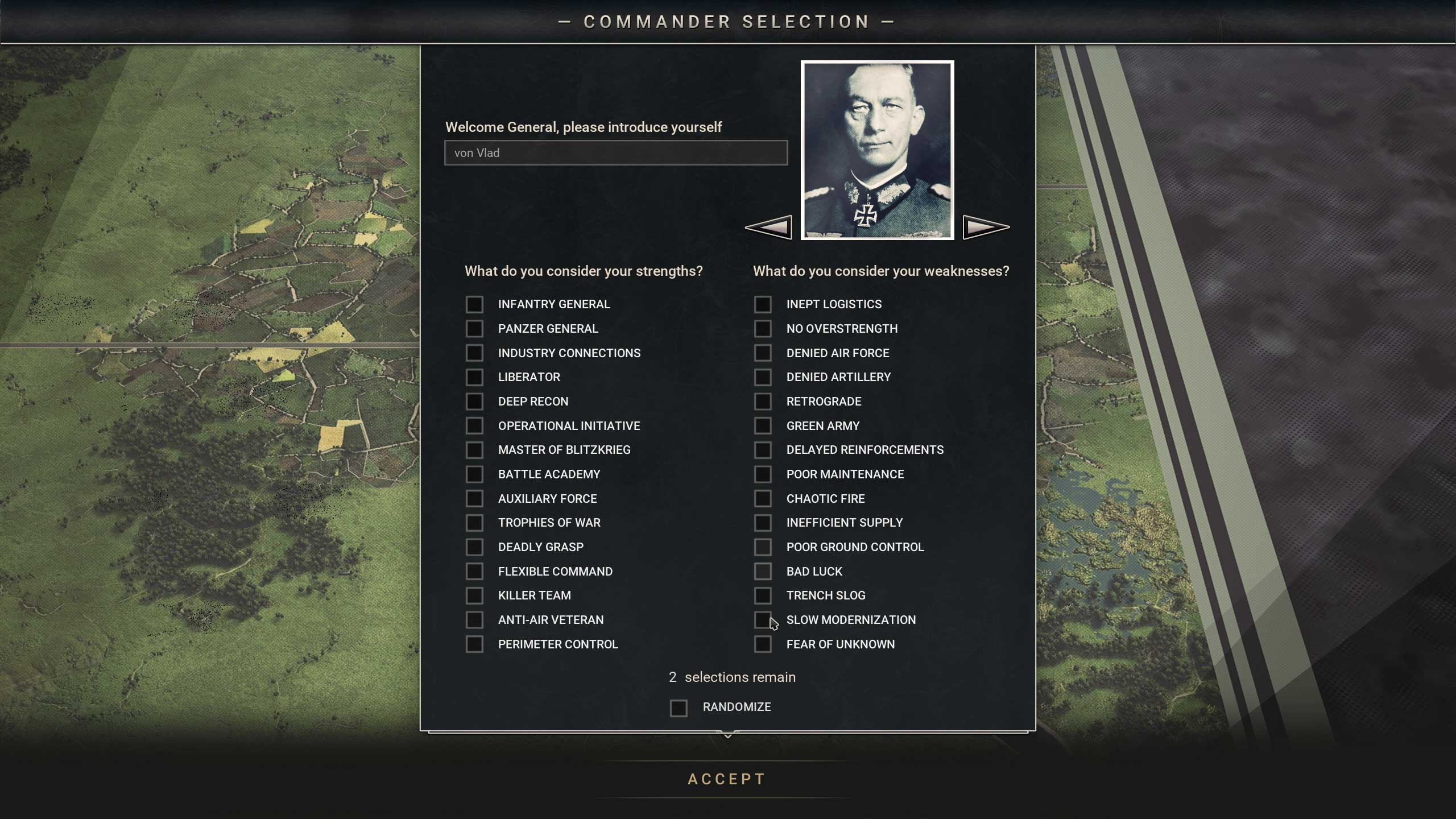 On deployment you can see the prestige (which is your currency to buy units) and core strength (max cap of your units). After you deploy your forces you need to scout the terrain and decide on how to best engage the enemy. Every unit has its strengths and weaknesses, which in turn relate to the tactical situation on the ground. Generally, it is better to surround a unit from several sides and thus reduce its defensive capabilities, even cutting it off from supplies then to charge mindlessly and try to take them out with brute force. At the same time though you need to take care of your own flanks. There are several features that enter into all these calculations now.

Initiative. This gives the attacking units a buff for initial attacks. Every time you attack a unit, that unit will counterattack yours. Units with high initiative will have a higher attack at the beginning of the turn and do more than the default damage and the counterattack will be less strong.

Suppression. Another vital feature, it starts at a zero of every turn. The more incoming fire the unit takes, the more suppressed they get. This takes away from the attacked units strength, it fires less often and it can even break and flee if they are suppressed too much. Artillery and strategic bombers are some of the units that have much higher suppression compared to their damage. Each turn the units suppression is reset to zero unless that unit is encircled. 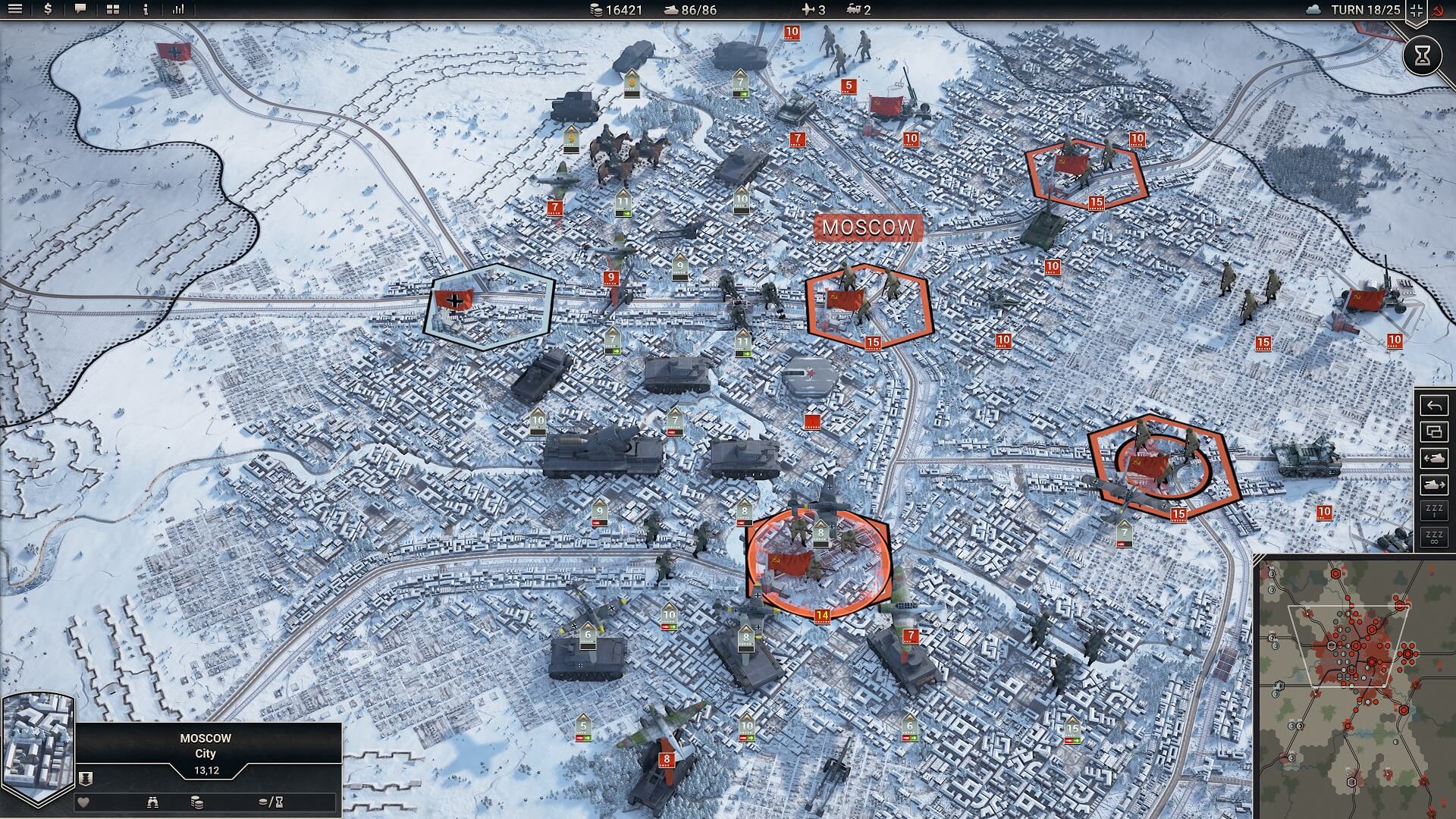 Those who messed up in Wehrmacht ended up on the Russian front. It was a hard knock life.

Encirclement. This is a great feature I like a lot. Essentially a unit that gets surrounded by enemy units is encircled in such a way that it cannot make a move without getting into a field adjacent to your unit. So, it doesn’t simply mean to wrap an enemy unit from all sides, but to make it impossible for the unit to move without getting into enemy’s sphere of influence, meaning the hex field next to them. Encircled units do not get to replenish ammo and fuel, lose suppression or heal.

Entrenchment. If unit stays still for a turn, they get the “entrenchment” buff. This depends on the terrain as well, with the unit gaining additional point of entrenchment up to their maximum,, which varies on the type of unit and terrain they are dug in. Cities for example make excellent choke points and it can be a real pain to get the defenders to surrender; to do this, you need to encircle and suppress the target until they yield, which can take a quite a while. Entrenchment is essentially a defense buff – or a debuff for the attacker, if you will – that negates a lot of incoming damage. It needs to be removed through attacking before you can inflict some real damage to the unit. A well entrenched infantry unit is especially good against armored vehicles.

Panzer Corps 2 is not a AAA title, but it looks amazingly good for its genre. The game allows you to zoom in very closely  to the hexagonal fields and observe highly detailed infantry units, tanks and airplanes that have been lovingly designed and crafted. The look and feel of the maps is sufficiently detailed, but not overly so that it pulls away your attention from the tactical situation on the map. Admittedly, sometimes you can miss out on artillery piece placed in a green valley, but that is a rare occasion. The game looks amazingly well, once again in comparative terms to its peers in this gaming genre, (it is not feasible to compare this game to Call of Duty or Total War titles) and runs very smoothly. I also enjoyed the animations, especially the shot down airplanes that spin around in flames and crash to the ground on fire. The carpet bombing, artillery fire and smoke on the battlefield round up the experience. 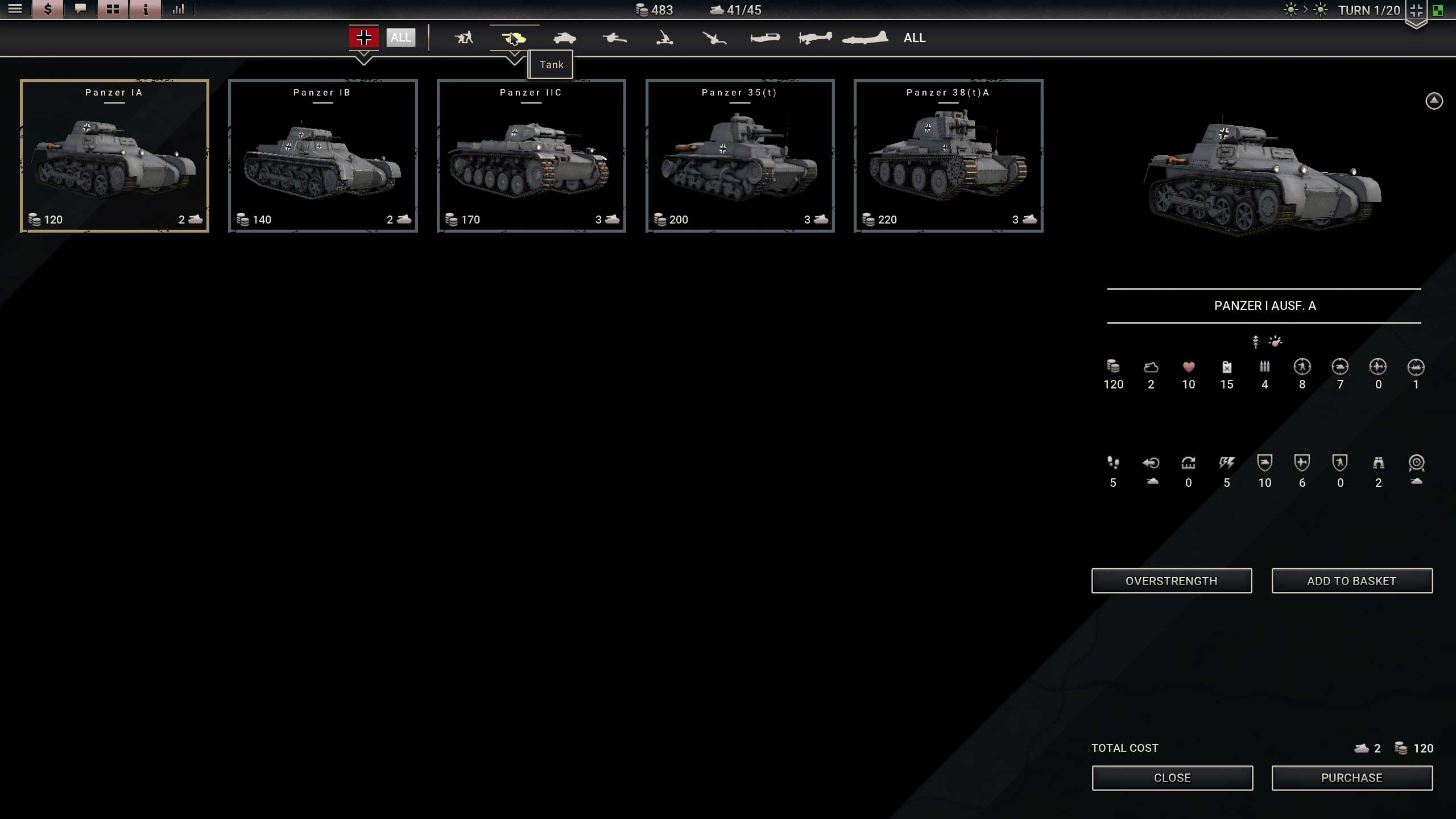 Overall I have spent up to seven hours playing Panzer Corps 2 and the opinion that I had at the end of the preview is the same opinion that I have after playing the full release; this is a well-crafted, finely balanced and challenging turn-based strategy game focused on World War II era. Since they are not so many of these types of titles coming out every year, Panzer Corps 2 is definitely a title that is going to catch the attention of many strategy gamers of there. 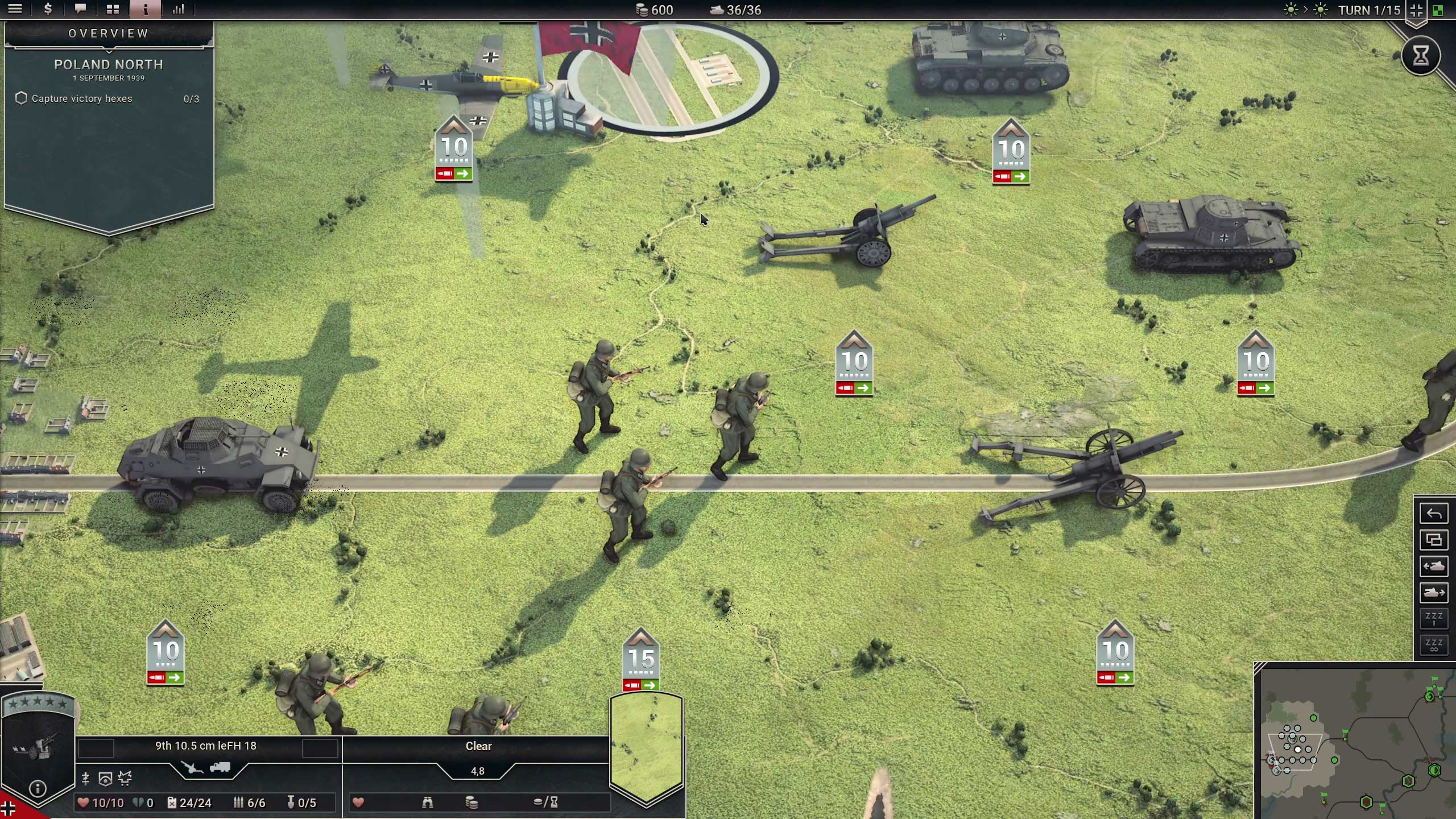 The units are very detailed and well modeled, shame that we spend most of the time zoomed out…

Panzer Corps 2 is localized in several major languages such as English, German, Russian, French, Spanish, Chinese and Polish. The full version also includes random maps a multiplayer, a replay feature when you can watch her finish games, unit history which is kill statistics and list of events a unit has gone through the mission, Steam achievements and Steam cloud saves. It is obvious that this game will be fully supported through a number of DLC’s and additional scenarios that you will be able to play through multiplayer modes such as PBEM and hotseat.

The missions can last between one or two hours, depending on your experience and prior knowledge of the maps and unit positions, and so far I have enjoyed them quite a lot. It appears that the tactical balance between units and their behavior on the field of battle is perfectly well designed, enabling you to achieve victories in seemingly hopeless situations if you play your cards right. Previously described features of the game such as suppression fire, entrenchment, encirclement and victory point control are executed perfectly and I have not seen a single point of reference where I could notice bugs or inconsistencies in the overall balance.

This is definitely a game that turn-based strategy fans should give a try! If you get the Panzer Corps 2 Field Marshal edition you will get access to the first two DLC’s for free, four bonus scenarios, digital soundtrack and 75 bonus skins for your units. I believe that the DLC’s alone should be a sufficient enticement to get this version! I am confident that I personally will get many hours of very enjoyable gameplay out of Panzer Corps 2, both playing single player campaigns and scenarios as well as playing multiplayer matches PBEM style. Interestingly enough, this game seems to be much more accessible to the genre than similar titles and will not chase a typical newcomer away screaming! So, even if you have never played this type of games before, Panzer Corps 2 is an excellent place to start!