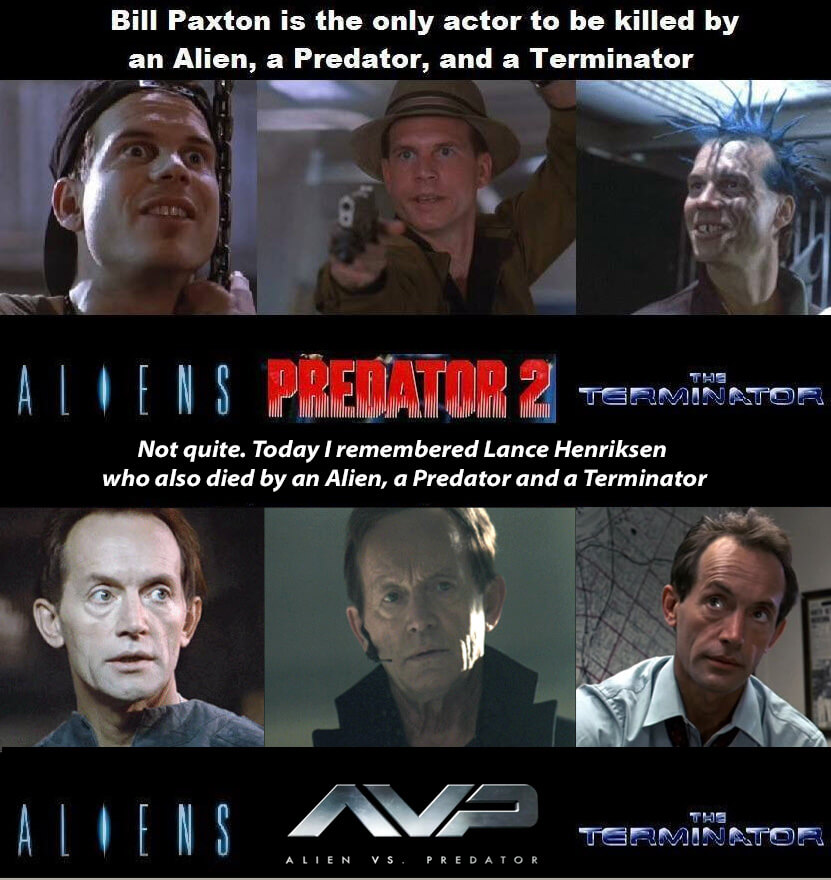 For quite some time I thought the only actor who ever had the honor of being eviscerated by an Alien, the Terminator and Predator in his career was Bill Paxton. I loved him as private Hudson in Aliens (he coined the famous “Game over, man, game over!” line and was actually improvising at that moment!) as much as I liked his overall performance as an actor, but I completely missed his small part in Terminator. He was one of the punks that were the first victims when Arnold came to town, looking for new set of clothes.

Couple of days ago I found out that there was actually another actor who was killed by an Alien a Predator and a Terminator next to Bill Paxton. It was actually Lance Henriksen, another one of my favorite actors. First time I saw him was in Aliens, where he played the android Bishop. Ripley did not like nor trust him at the beginning, but they came to be allies by the very end of the movie where the alien queen dispatched the poor Bishop in a quiet gruesome manner – she pierced him by her metallic-like tail (more of a lance, actually, if you will pardon my pun) and tore him to pieces.

Henriksen also played a detective in the first Terminator, stationed in a precinct where they held Sarah Connor when Terminator came to town and wiped out everyone in there. And, finally, there is Alien vs. Predator where Lance Henriksen is playing the mogul businessman Weyland from the Weyland-Yutani company. He really didn’t get a lucky break in that movie; not only he had a lung cancer and not long to live, but he also managed to trap himself into an underground pyramid with a bunch of aliens and predators. In the very end he suicide-attacks a predator, and even though he doesn’t make much of an impact, he at least goes off as a brave, proud man.

So, in the end, it is not the only Bill Paxton who managed to get himself killed by the three notorious “movie Monsters”; Alien, Terminator and Predator, but Lance Henriksen managed to pull off the same feat as well.

Which actually makes me wonder; was there ever a character who survived all three legendary Hollywood monsters?