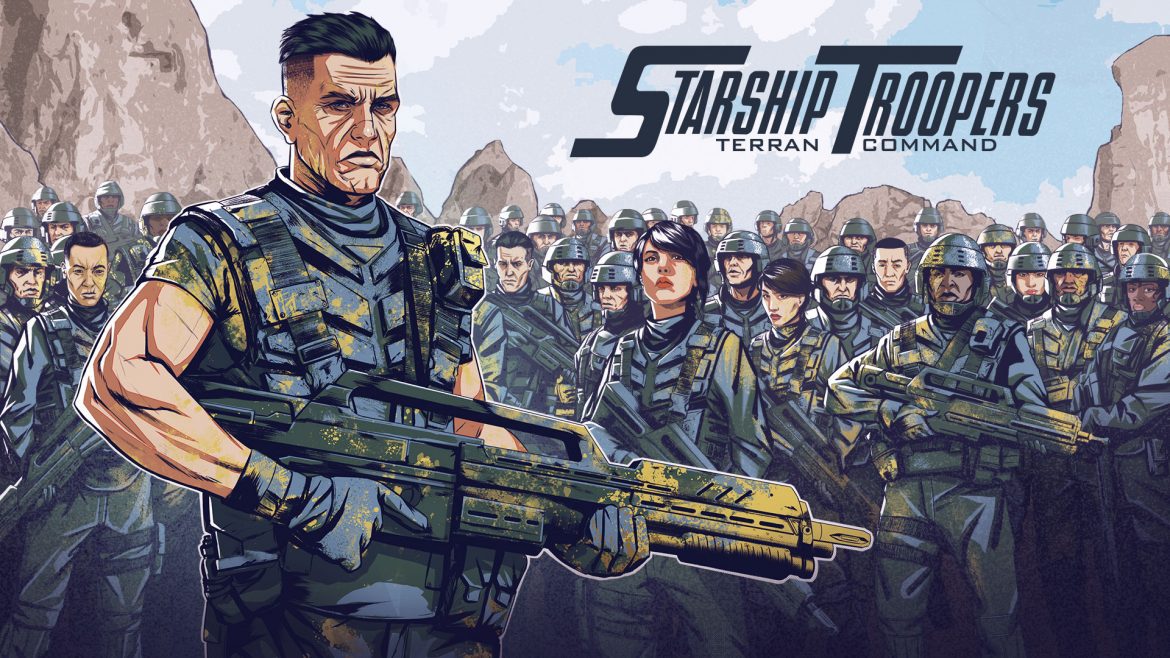 Take command of the Mobile Infantry and do your part in the war against the Arachnid threat. Build, develop and command your armies and exterminate the bugs. Ensure that human civilization, not insect, dominates the galaxy now and always!

The campaign’s intro will be familiar to all who have seen the 1997 sci-fi film classic, Starship Troopers, from TriStar Pictures. You will first take part in the infamous attack on Klendathu: As in the movie, the action starts with a gung-ho assault, but soon takes a turn for the worse, culminating in a general retreat from the planet.
You will then be deployed to the harsh, desert planet of Kwalasha. 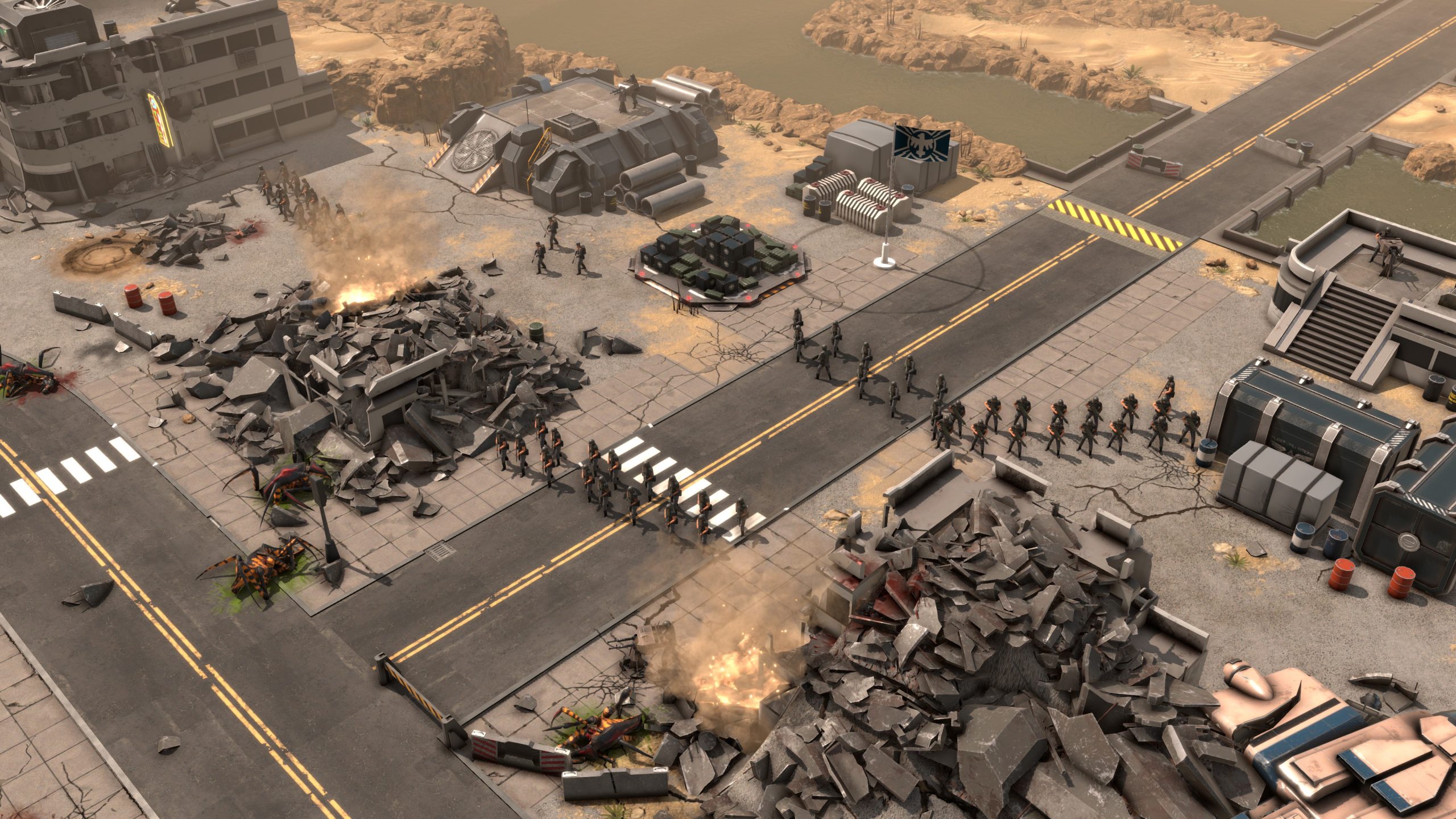 The demand for its rich mineral deposits has transformed the strategic importance of this once remote outpost. Previously a sparsely populated haven for those who felt the Federation had nothing to offer, it now plays a key part in humanity’s fight for survival. But somehow, despite the vigilance of the Fleet, Arachnid activity has been detected on the planet. Where did these bugs come from? How long have they been here? Why are they here now?

What is known is that the loyal men and women of the Mobile Infantry have boots on the ground! And they’re here to serve, defend the Federation, secure the vital mineral resources and protect the loyal citizens of Kwalasha.
Take part in this exciting military campaign, ship out to amazing and varied locations and experience the heroic war against the Bugs – all presented live on FedNet.

As the story unfolds, you will progress from a green platoon leader leading recruits fresh from training to a rugged veteran commanding elite forces across the wartorn planet.

Expect a genuine Starship Troopers feel: violence & gore are commonplace as entire platoons of fresh recruits are sent into the meat grinder, as part of their patriotic duty to the Federation. 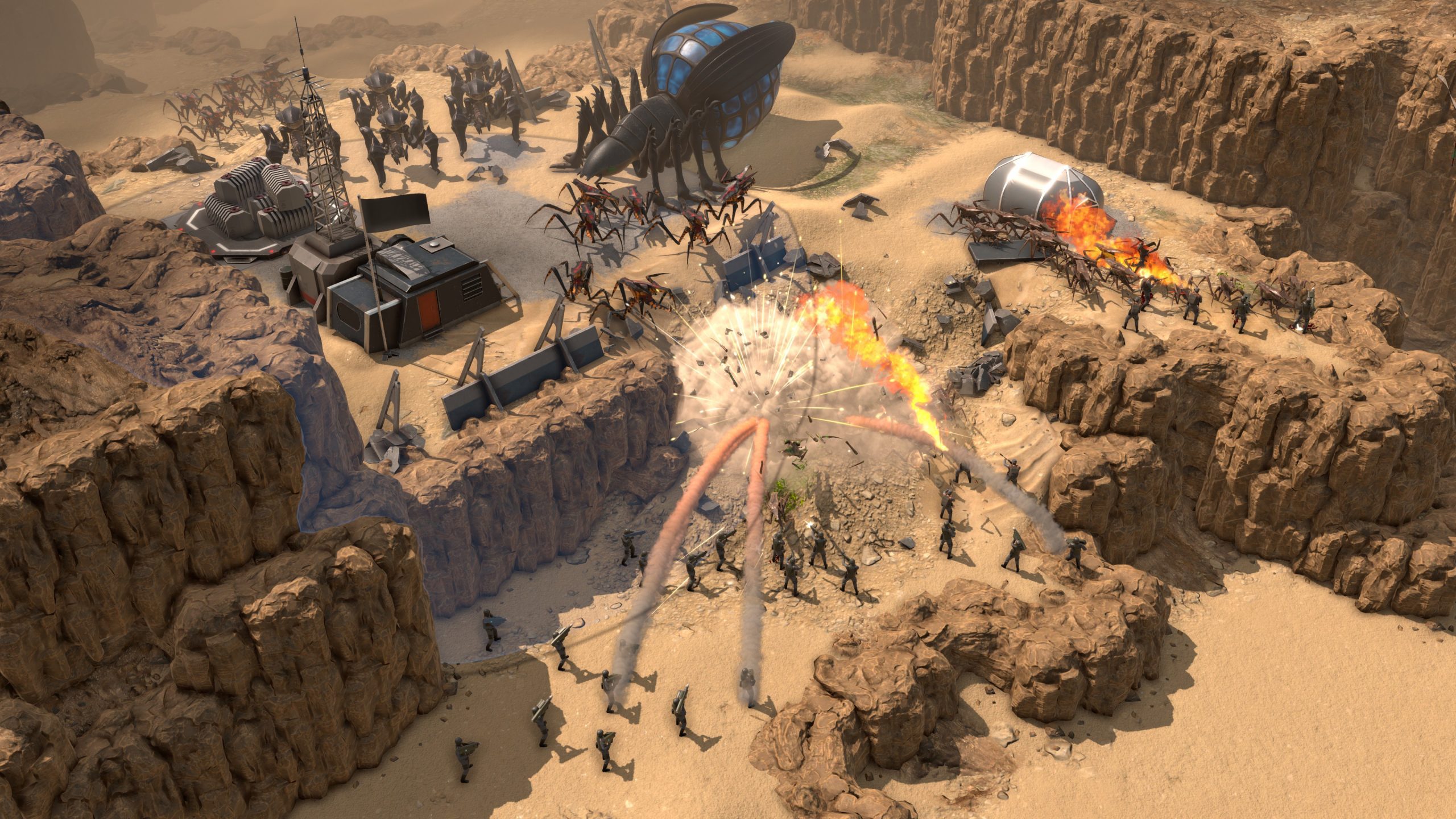 Dismemberment, splats of bodily fluids and flying fragments, horrified screams, and flailing, crawling bodies will be the norm. The scenes of devastation standing jarring contrast to the boisterous and gung-ho attitude of the soldiers at your command, eager to prove their commitment to fighting for the Federation and earning their citizenship.

Accompanying the action is a riveting soundscape filled with thundering claws, deafening screeches, sprays of gunfire, and more, all complemented by a stirring musical score.

The game’s units and narrative draw inspiration not just from the original 1997 film but also from its sequels as well. It’s a big universe filled with dangerous bugs to encounter and deadly technology with which to squash them.

Take command of the Mobile Infantry and hold the line!
While the Arachnids can rely on virtually limitless numbers, the Mobile Infantry must develop effective tactics to overcome this imbalance. Deploy your units at strategic locations to cover vital choke points and gain superior firepower through tactical use of elevation levels. 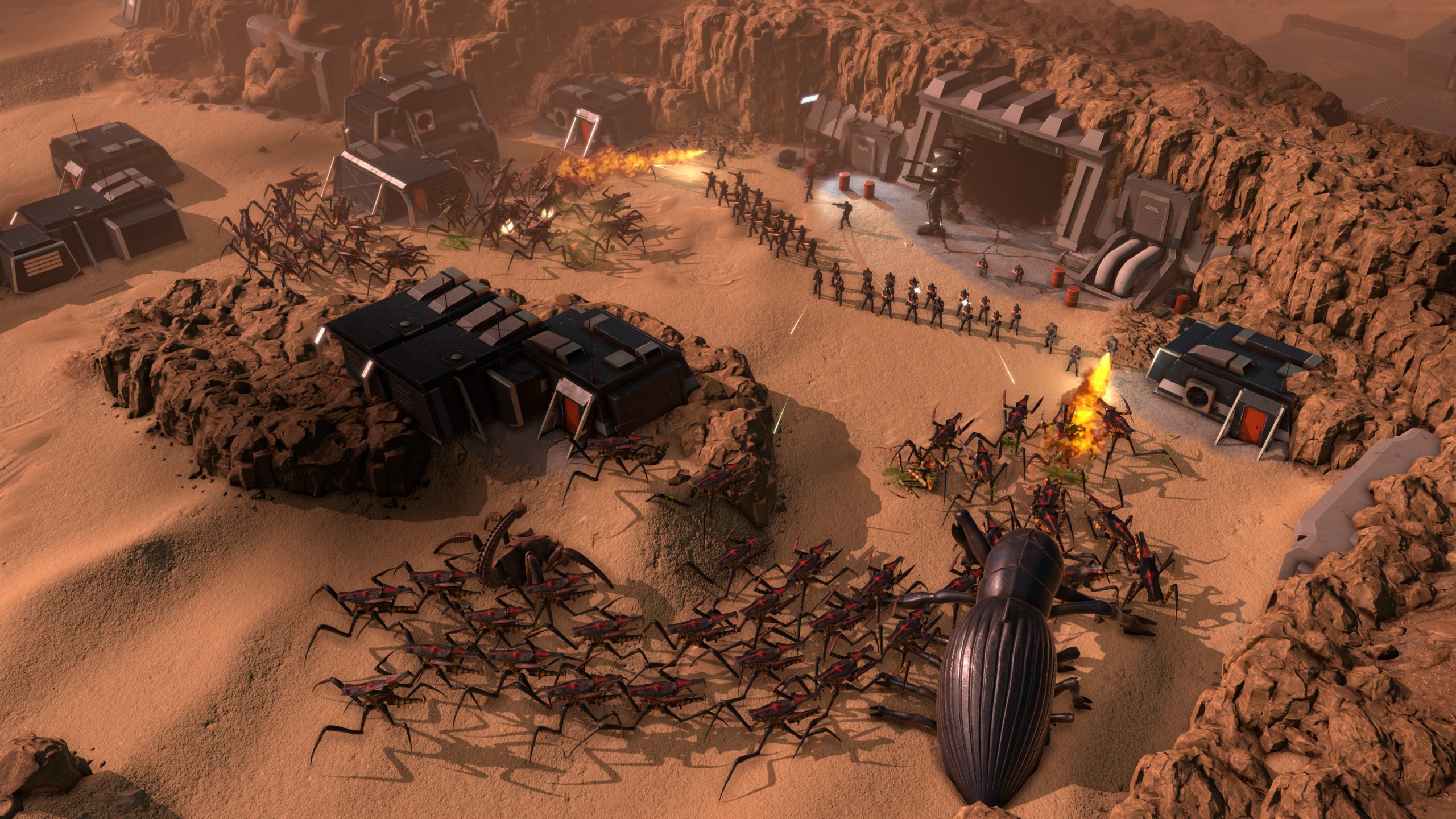 Moment-to-moment game play is geared towards a defensive feel, with the player looking to use their forces to manoeuvre to the most advantageous points to guard against bug attacks. This approach applies both when protecting the walls of Federation outposts and when venturing forth into the deserts and hills to clear out bug hives. The careful positioning of units to maximise their firepower is the key to success, through the creation of intersecting fire zones combined with the clever use of special weapons and abilities.

Mid-level gameplay is based around the expansion of the player’s force. Expansion is accomplished through killing bugs, achieving objectives and the capture of Radio Outpost locations. Once captured, these outposts allow the player to increase their force’s size and sophistication through the construction of buildings on set points around the base. The outposts also serve as transport hubs between which the player can shuttle their units to respond to emerging threats around the map. 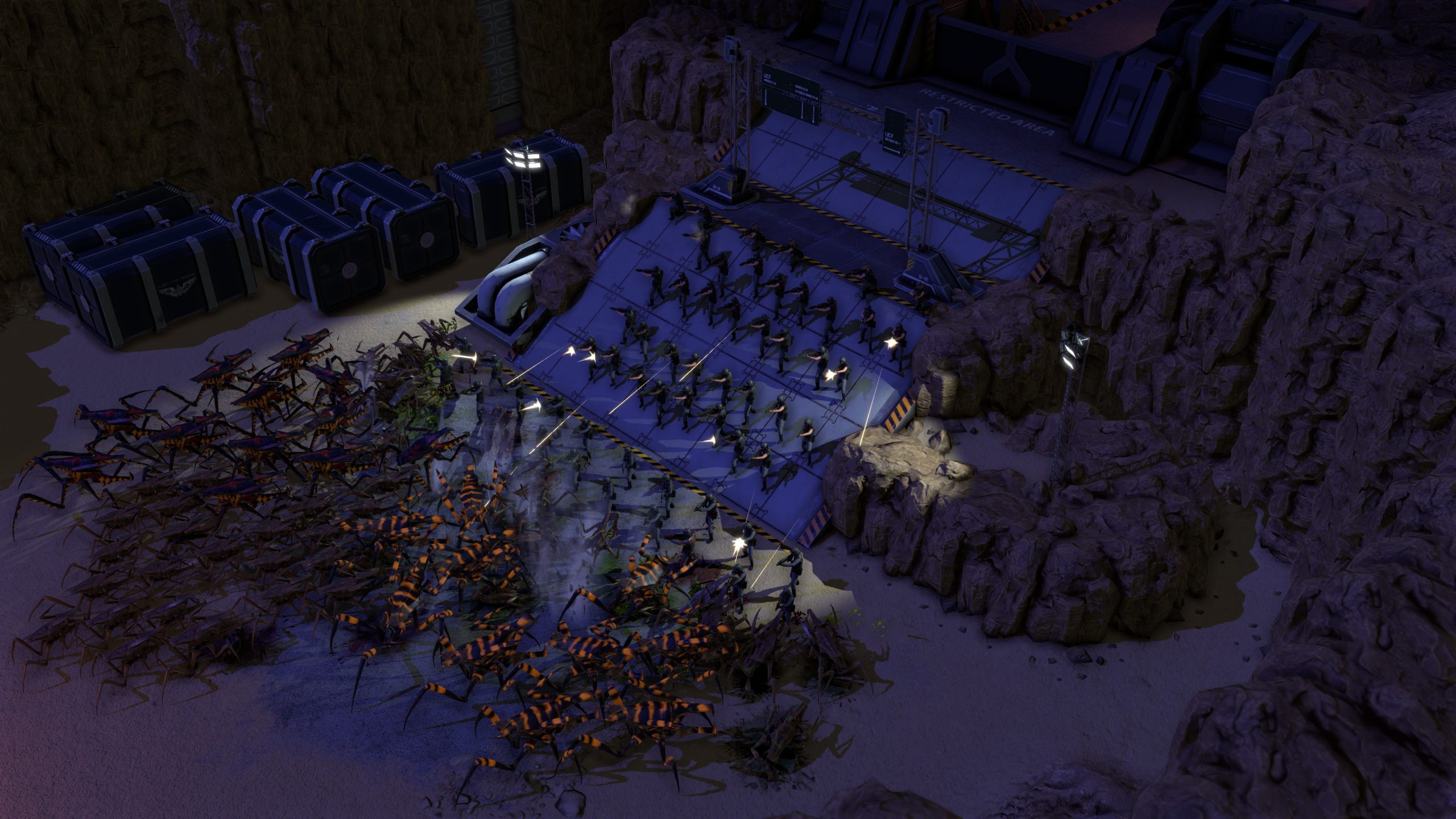 Higher level decisions will be driven by narrative mission design, with emerging objectives, gameplay pace and setbacks being controlled via mission scripts that respond to the player’s progress. Mission and map design will maximise the use of bug counter attacks and raids to emphasise the defensive nature of the tactical combat and the shuttling of forces between key strong points as well as to give a sense of ebb and flow within a mission. Alternative routes and exploration will be encouraged, and different force compositions rewarded.

An expansive range of unique units, weapons, and special abilities are at the disposal of Mobile Infantry commanders.
Infantry squads armed with Morita Assault Rifles and MX-90 Fragmentation Grenades form the mainstay of your forces. Rocket Troopers deliver deadly payloads with pinpoint accuracy while Engineers vitally shore up defensive positions with MG turrets, barricades, and minefields.

As the campaign progresses, technological breakthroughs unlock the true potential of the Federation’s arsenal with E-Pulse rifles, TAC Fighter airstrikes, heavily armed Marauder mechs, and many more developments optimized for spraying Bug ichor across the battlefield.

The units list is extensive and draws from sources across the film franchise.

Exact release date for Starship Trooper is due to be released during 2021.