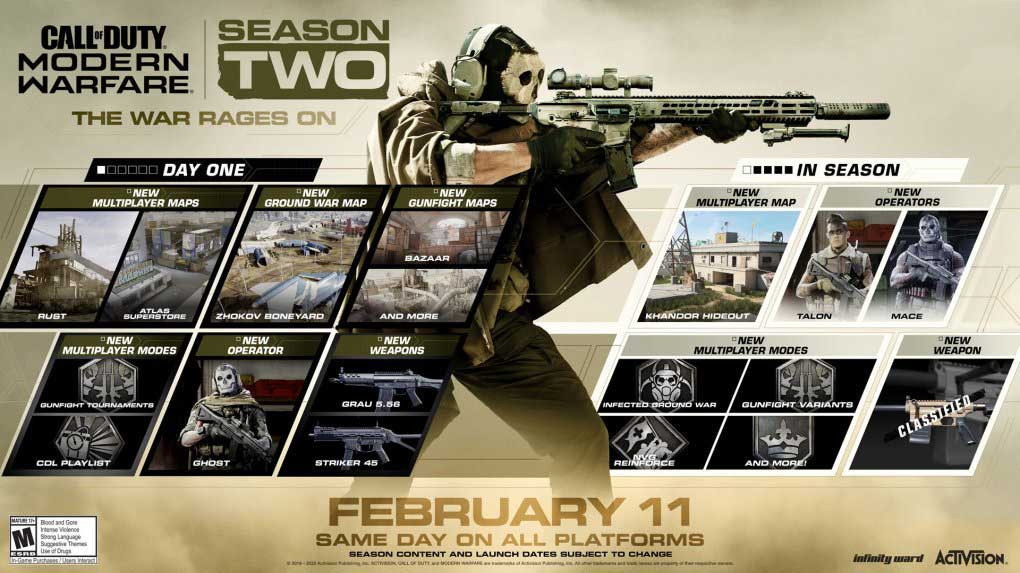 Infinity Ward has officially announced Season 2 of Call of Duty: Modern Warfare. According to them, the starting signal will be given on February 11th, 2020 – today, Tuesday – for us in the old continent, it should be somewhere around 19h CET, 6 hours later is you are on the east coast USA. A lot of content is coming our way, and here are some details.

We now know more about what to expect in Season 2 of Call of Duty: Modern Warfare. Among other things, you can look forward to two new multiplayer maps, whereby “Rust” should look especially familiar to fans of Call of Duty: Modern Warfare 2. The other map “Atlas Superstore” takes place in a huge department store. Furthermore, an additional map for the Gunfight mode (Bazaar) and a map for the Ground War mode (Zhokov Boneyard) will be available on launch day as well.

The character Ghost celebrates his big comeback as a new operator on the launch day of Season 2. The new Battle Pass with 100 tiers and just as many rewards to unlock will also be launched. Later in the second season of Call of Duty: Modern Warfare we can expect more operators, another multiplayer map, and various other content.

GOG.com is giving away 2 games