Galaxy-sized sandbox and unlimited power - what's not to like with Distant Worlds? 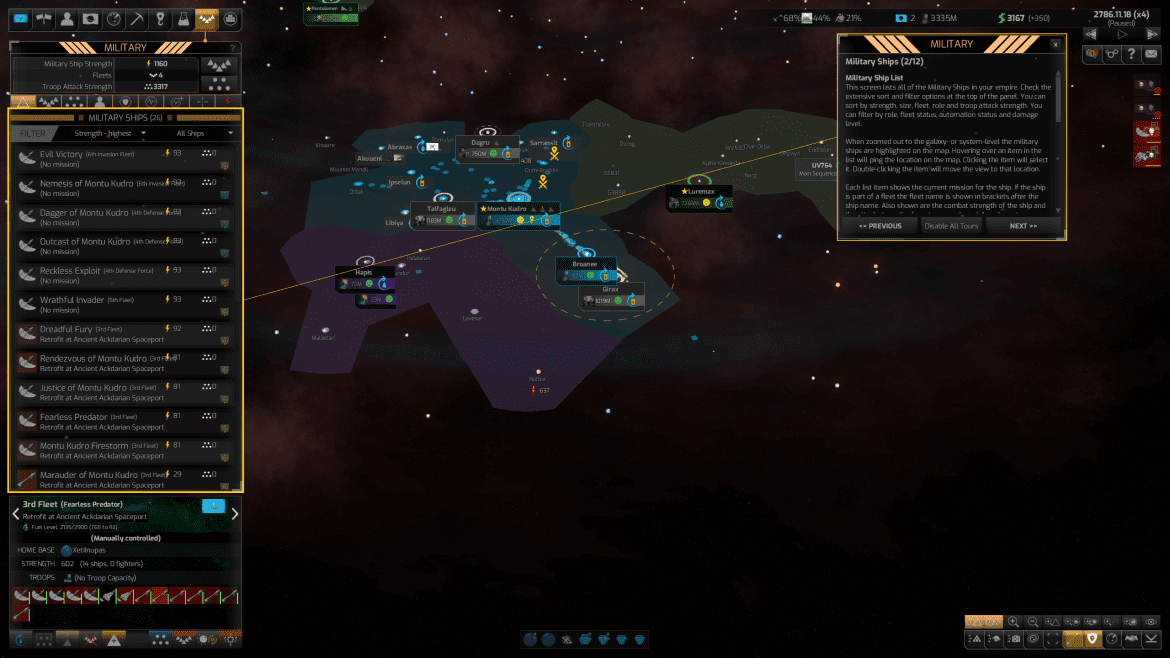 Upon hearing that there is a sequel on the horizon for Distant Worlds, a 4x strategy game that allowed the player to take control over a galactic species on both galactic and down-to-earth, small scout ship level, I was naturally highly curios and, I must admit, cautiously optimistic. 4x strategy is a genre that does not have too many (good) representative games, and Stellaris was an undisputed ruler for several years now. But then again, this is a niche genre, and contenders do not appear as often.

The question was, could Distant Worlds 2 be a worthy challenger for the throne?

Reach for the Stars…

Distant Worlds 2 starts out with menus -many, many menus. I can’t recall a game that allowed the player to adjust so many different settings, even in the 4X strategy genre. I was most impressed with the possibility to determine how much direct control of your space empire you want to take over yourself, and how much of it you can adjust to your own preferences. From colonization and planetary management to military buildup, diplomacy and espionage, you can set the tone for everything and decide whether how much control you want over a specific area. Let us take diplomacy as an example; you can have the system running 100% manually where you make all the decisions, or set your advisors to make decisions on their own and you just need to approve them, or you give them the full power, whereby the advisor AI will set the course, decide and execute a specific action. 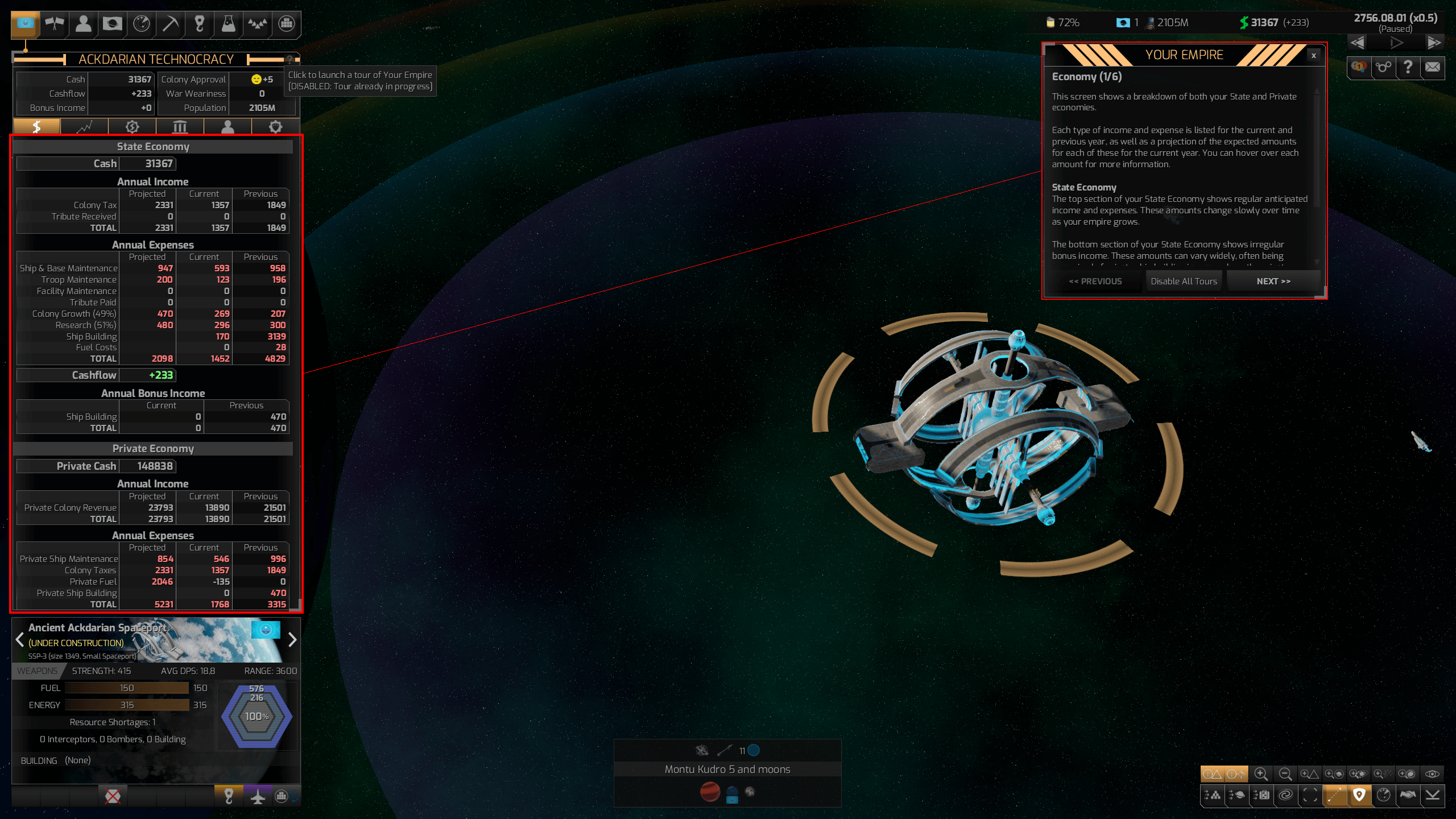 It all starts with one ancient station…

Here is the first problem, although I hesitate to call it a problem – I could not tell whether the advisor AI was a generic AI in background, or was it determined by the skill of diplomats in my employment, or was it a some kind of combination of both? Playing as the Ackdarian, one of the faction that was completely finished for the preview build, I found that the said species had a pretty decent grip on the diplomacy, however all my relationship with a re-discovered lost colony of mine was a big gravy train towards nothing. My advisors kept telling me to give them money gifts, which I did, but for some reason they never kept liking me enough even though I was throwing coffers of cash at them (insert dating jokes from 90s here). In the end, all the money was wasted, and I never managed to get the close enough to establish proper agreements with them and embark on the path of reintegrating them into my empire

Which doesn’t matter much, since I was deeply enmeshed in research, which is a bit different in Distant Worlds 2 to what we are usually used to in similar games. For one, you do not know where each research will take you, since you only see a couple of steps down the line, mostly only one, though. It is highly probable that I should have focused more on research of advancements in diplomatic relationships, but I was too invested in those shiny ships that are whizzing across the galaxy all the time.

After having built several exploration vessels, I have sent them on their merry way and kept researching more advanced propulsion types. Soon enough I could build ships that could fly out towards distant worlds (no pun intended) and even overtake their older counterparts that were still milling about at sub-light speeds. But no worries, all one needed to do was to order these ships to go back and upgrade or, even better, assign them automatic orders to upgrade whenever they are able to. This helps significantly, since you will be up to your neck in exploration ships, traders, construction vessels and military fleets. While you can slow down the time in the game and even pause it, the amount of the micromanagement will soon be dialed up all the way to 11. 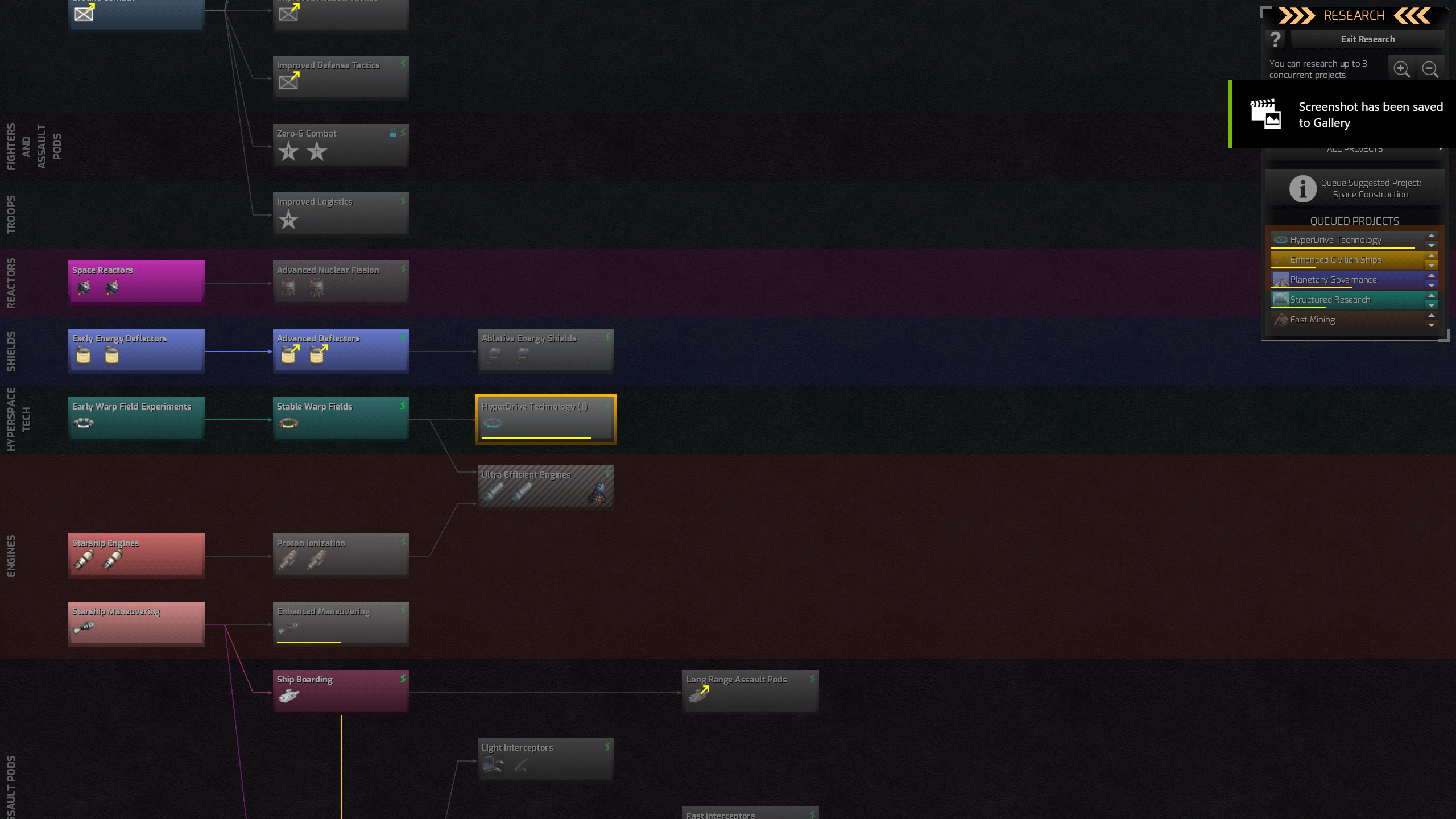 Research tree in Distant Worlds 2 hides more than it reveals

It is not easy to tell what you need to research next. Lulled in the false sense of safety, I focused – as one should at the beginning of such games – on exploration and research, and much less military. Before I knew it I had a neighbor that was bullying me around with destroyers while mine fleets still consisted mainly of frigates, and ones that were underequipped in comparison to his death machines, as well! But the punishment for such mistakes seems not to be as severe in Distant Worlds 2, since you can focus on building up your space fleets and put up a decent fight for every world and outpost you own.

The Plethora of Details

While I was observing one of the scout ships approaching a gas giant, I noticed a number of bluish “projectiles” emerging from it. For a moment I thought it encountered one of those “space monsters” these games love to throw at us and was firing rockets or torpedoes, but instead it seems to be a number of probes that the ship was launching to quickly survey the planet. This is one of the many, many details you can witness in this game if you pay attention. There will be dozens, then hundreds of ships of all kinds travelling their own routes, going after their tasks. Pirates will attack you, your fleets will move in to defend, bases will build new vessels and retrofit the old ones… To say that it gets a bit wild is a huge understatement. 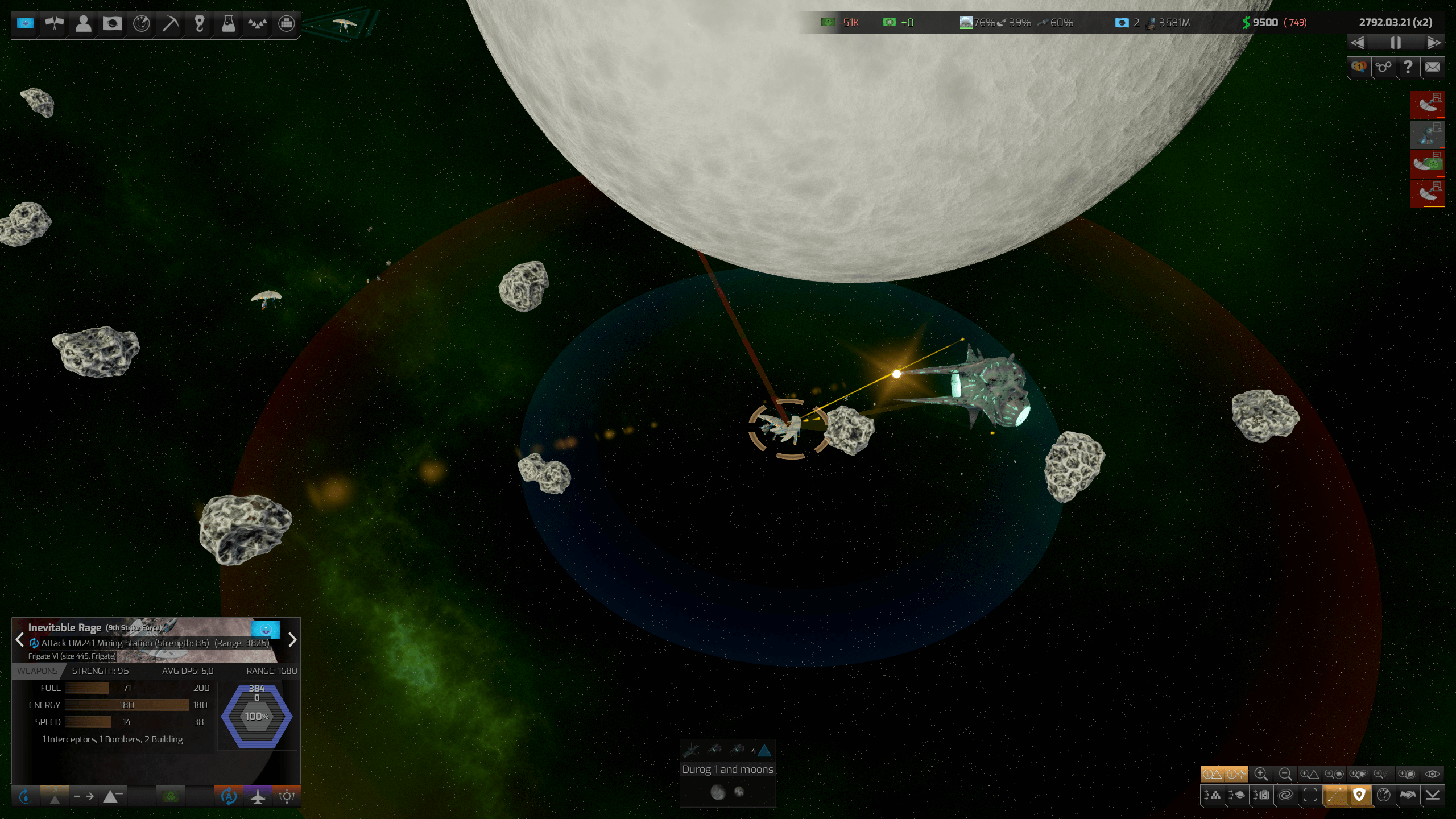 Space battles are a regular occurrence, you will probably spend more time fighting than not

One thing that bothered me from the very start was music. As I started with the tutorial, the opening theme reminded me of the screeching cacophony of the original Alien movie; needless to say, not a necessarily good fit for a 4X game. Additionally, the music cuts off at crucial points, indicating that the loop wasn’t done properly. It gets better as the game progresses, but the best the music gets is by becoming somewhat passable. This is not a good thing, since a well flowing sound score in the background of this type of games can make or break the atmosphere. Stellaris did a great job here, even the old legend as Master of Orion 2 has a soundtrack that holds up well even today… It remains to be seen how this will work out for Distant Worlds 2.

I have mentioned it before, but I must  emphasize it again – one of the strongest aspects of Distant Worlds 2is its possibility to automate many operations, but also set guidelines. For example, colonization is an important issue, how would you like it to be handled? You have the option to manually conduct settlement of new planets, to have advisors make suggestions but not implement them, then to have advisors suggest and implement suggestions after shortly waiting for your approval (or, better said, objection!) or fully automate the entire endeavor, where the AI will take care of colonization without bothering you any more. You even have preset configurations such as “Rule in absence” (everything is fully automated), or “Expansion” or “War and Combat”. You can even set up your on custom configuration and switch back to it when needed.

To return to my initial point – can Distant Worlds 2 challenge the throne and become the next best thing in the 4X strategy genre? Or can it even be a good alternative to Stellaris?

It is still hard to say. The potential is definitely there; the game is is rich in detail and option, and certainly has all the required predispositions to satisfy every 4x megalomaniac. Furthermore, it gives players the option to adjust the amount of automatized/manual control across their empire, so that both micromanagers and lofty rulers who do not care much about administration will be able to set up a game to their own liking. However, the question of how balanced the game is, how actually smart the AI is, both your advisor and enemy AI alike, and how buggy the entire affair is, that remains to be seen. The preview build was fascinating, but definitely plagued with bugs and errors which, as I sincerely hope, will be rectified in the final version.

Let us wait for the march 10th to make the final verdict – I, for one, am still cautiously optimistic!