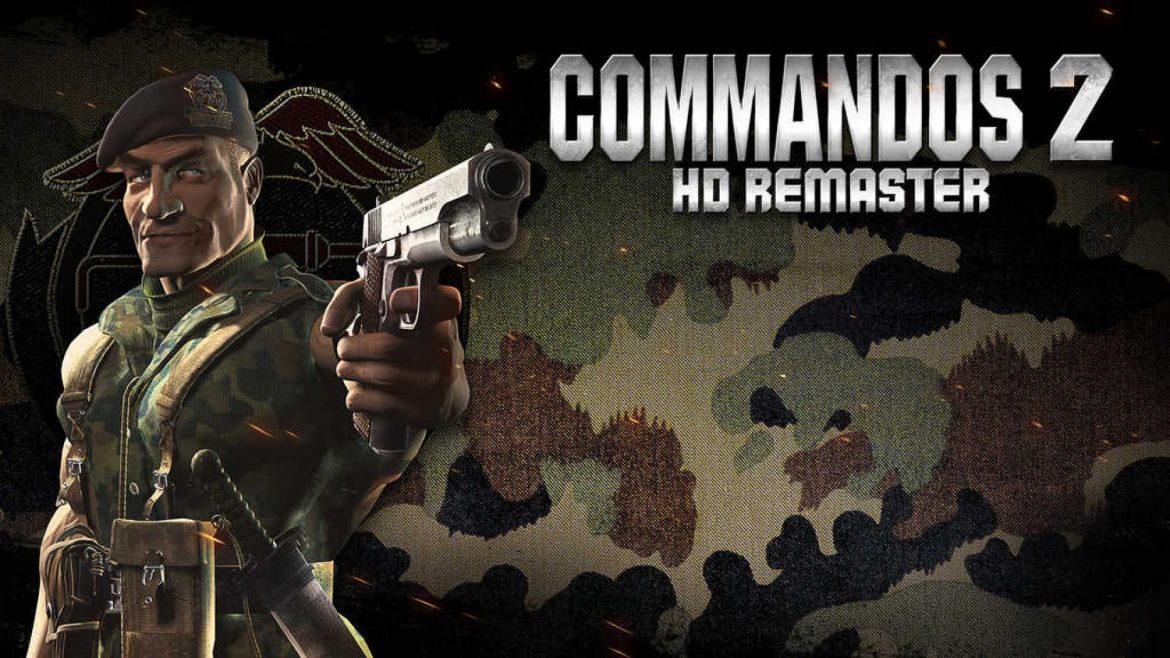 HD Remaster of Commandos 2 caught me off guard; I had no idea about it being in development, but nonetheless it was a very pleasant surprise. When you get to be an older gamer, you recall titles that you grew up with especial fondness. Commando game were definitely a part of it.

The new edition of the real-time strategy classic from 2001, brought to life with the help of the Unity Engine, is as challenging as ever, but this time it looks a whole lot better. The main reason for this is the spiced-up graphics. Remember: At that time, a resolution of 1280×1024 pixels, 64×64 pixel textures and character models with only 218 polygons were the highest of emotions, and average monitor could boast with 1024×768 resolution. With the HD Remaster, however, the game now runs in Full-HD resolution for the first time. The textures are also eight times as high in resolution (512×512 pixels), while the character models with 700 polygons per character also look much crisper.

The result of these efforts is a game with updated looks  and slightly upgraded animations. But the game still feels along the lines of the old legendary title I have spent so many hours playing as a kid. However, the game has changed in some perspectives, reflecting the “mores” of our times. Those familiar with the original will also notice that the Manchester-based developer Yippee! Entertainment defused the symbolism – as was already the case in the German version. Swastikas are therefore absent, because apparently the fragile youth of the day can be so easily seduced to pull on the leather boots and march down the road with torches. This defused version of the game was distributed across the world, making sure there would be no legal issues, but even more so – one could argue – due to the wave of hyper-sensibility the western countries are experiencing in the past several years. I can’t blame Kalypso; why would they want all the hassle with the politics of today, if they can avoid it?

Personally I do not care either way, as long as the game itself is still good, and Commandos 2 remaster is good! The most significant problems with these old legendary titles is the fact that they rarely age well when it comes to the graphics. Some games pull it off, such as Fallout 1& 2 and Master of Orion 2, but other such as Desperados and Star Trek: Starfleet Command are literally unplayable. As long as the game can remain truthful to the original, it will get my seal of approval. Preferably it will have little to no changes to the gameplay itself.

Fortunately, the HD Remaster does not change the basic, highly motivating gameplay. The player is still in command of nine heroes (plus a faithful hound!) with their unique abilities that you need to combine in order to wreak havoc behind enemy lines and inflict heavy losses on the Wehrmacht – and later also on the Japanese allies. Immediately after two training missions, you’ll find yourself in the port near La Pallice on the French Atlantic coast. The Nazis have taken possession of an Allied submarine – and now it’s up to you to take the war material, crew and the legendary Engima cipher machine to safety. Sounds familiar? Luckily, after all these years, I barely remember any thing from the game, so I get to relive it as if I never played before!

Next to the two launch missions in La Pallice, the campaign includes, as before, eight other main missions. These will take you to the North Pole, Burma, Thailand, the volcanic island of Savo in the South Pacific, Vietnam, Cherbourg in France, Colditz in Germany and finally the steel monstrosity that is the Eifel Tower in Paris. The scenarios are varied and exciting, just as before, especially since many of them are based on famous movies. The Thailand mission, for example, was inspired by David Lean’s Oscar-winning masterpiece “The Bridge on the River Kwai” from 1957. The Colditz mission is a clear homage to “The Dirty Dozen” (1967) by Robert Aldrich and “Saving Private Smith” was inspired – as the name suggests – by Steven Spielberg’s “Saving Private Ryan”.

The individual missions have numerous main and secondary objectives and, due to their complexity and the high degree of difficulty, usually tie up hours in front of the screen – per mission, of course. In addition, just like back then, there are a total of ten bonus missions. To unlock the entertaining, but usually much shorter additional missions, you have to find all the fragments of a torn photo in each main level.

In the spirit of the Commandos game you still need to juggle all the strengths and weaknesses of all of your agents in the game: to complete a mission successfully, the individual talents of the heroes must be strategically combined. With the diver defusing underwater mines and climbing steep walls, the Pioneer tracking down minefields and arming explosives, the spy slipping into enemy uniforms and taking enemies out of circulation with lethal injections – the core gameplay captivates tacticians and stealth enthusiasts as ever and places a strong focus on multiple solutions.

Is the game perfect? By no means, there are still some bugs and glitches that plague this title. Display problems on widescreen monitors, missing vehicle animations (e.g. wheels that don’t turn), missing footprints in snow and sand, enemies that have already been killed but suddenly reappear standing up (but are still dead) after loading a game save. The developers are currently working on fixing these problems, an adjustment of the minimap, performance optimizations, and the controller performance. Personally I am glad that I was one of the luckier ones and that these bugs, even if they’ve shown themselves to others, didn’t bother to ruin my game. Overall, the game is very solid and I enjoyed playing every minute of it.

However, (un)surprisingly, a number of reviewers and players seemed to dislike the game, mostly complaining how little new content and features there are. Personally, when it comes to remastering the old games, I would usually just want them to get as little fixes as possible, beyond a slight graphical upgrade; the best case scenario would be not to change the game at all, if possible, just make it compatible with the current operating system and that would be it!

If you never played Commandos 2 then the HD Remaster version probably won’t be as appealing to you as it was to me; even upgraded, the graphic quality is nowhere near today’s standards, and the gameplay is accordingly archaic. But if you spent many hours nearly 20 years ago playing this game you will probably get a monster kick from the nostalgia gaming factor alone.

Ecape from Tarkov – AS VAL is the best/simplest gun in EFT!