ANNO 1800 is the seventh in the series of amazing city-building, real-time strategies that put the player in the role of a mastermind behind the development of their own city. The time periods for these games were different, spanning from the 14th to the 22nd century, but the goal is the same – create and develop a sustainable city and ensure its survival through construction, trade and maybe just a wee bit warfare on the top!

First off I would like to address a small controversy, which is the shift of ANNO 1800 from Steam to the Epic Games Store. By this time it should hardly be news to anyone that Epic Game Store, backed up by the success of Fortnite and funding from the giant Chinese mobile gaming company Tencent is going hard after Steam, trying to bring both publishers and the player mass to the new platform. The main enticement is, naturally, money; publishers get to keep a much larger portion of the income with Epic, because Steam takes 30% of the profits and Epic only 12%. For actual users there is no incentive to switch, apart perhaps the notion that competition to Steam is preferable even if the new platform is still missing a ton of basic features that Steam users grew accustomed to over the years.

I personally decided toi purchase the game via Steam in order to simply avoid the necessity to juggle one more game launcher (a flawed one to it) and have all my updates in one place. It was a calculated risk since the most YouTubers I follow and appreciate stated positive impressions about ANNO 1800 and I have long ago decided to not pre-order games at all. Whether the choice was right or not remains to be seen. 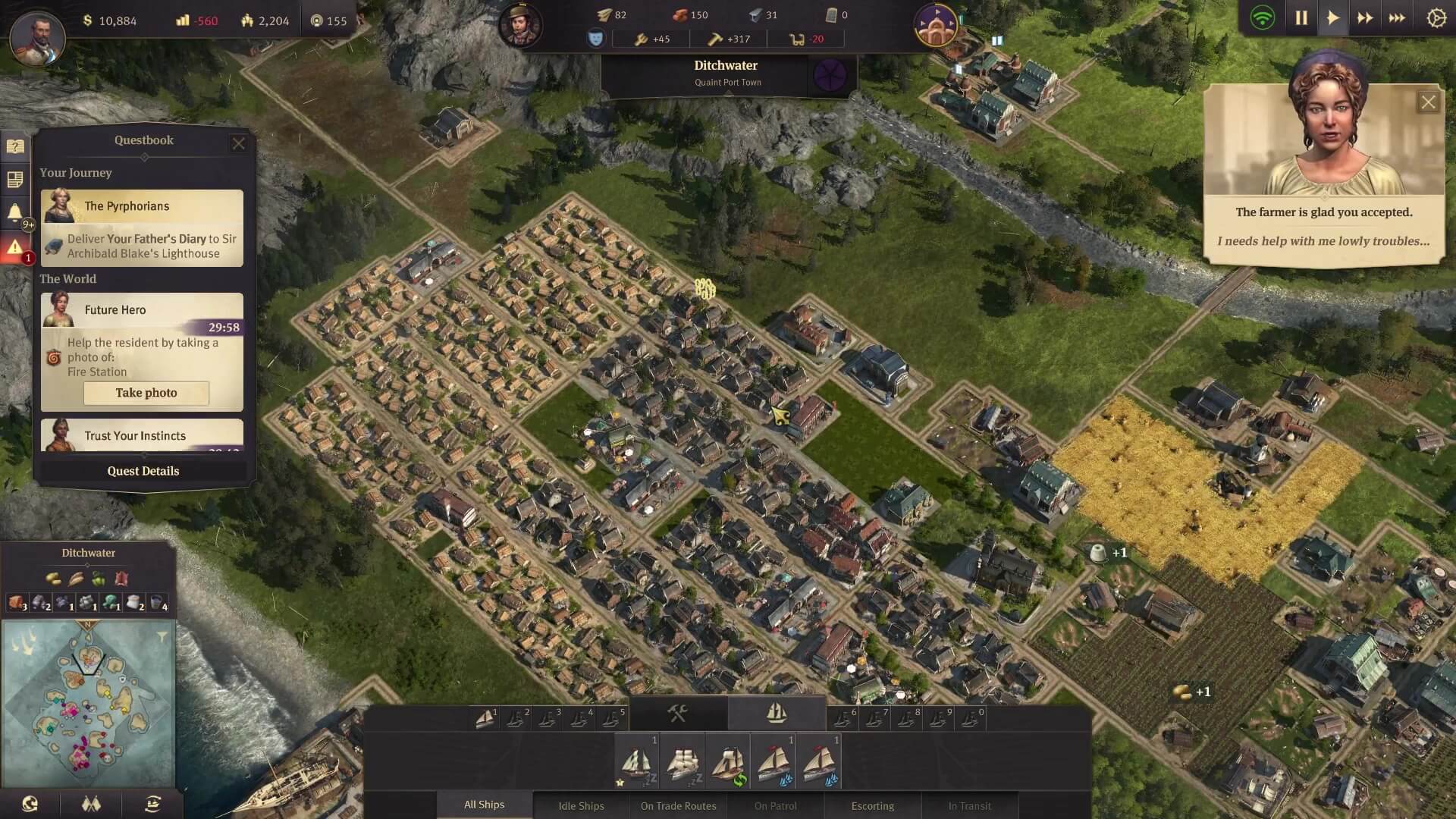 Creating symmetric settlements and proper layouts in ANNO 1800 is a challenge, but a fun one

ANNO 1800 campaign mode is simple and straightforward, the story fairly cheesy and obvious to the point it was apparently made that way intentionally. Evil uncle frames your noble father and it is up to you, my dear player, to restore his good name and claim your place as his heir instead of remaining an estranged son. You get to choose the difficulty degree, embark on the ship with your sister and start your new fortune as a city builder. During the campaign you will receive missions and advice on how to proceed completing them. You can set how much help and explanation you need from the AI adviser, both in the campaign as well as in the sandbox mode.

The gameplay is simple; you are on an island and start with a port and several farmer houses. From there on, it is all about developing your city, creating and maintaining your manufacturing chains. As the city develops so do the needs increase, and whereas the initial farmers are happy to have clothing and some booze, the population will have higher demands as they evolve and raise in ranks, from farmers and workers to artisans, engineers and investors. This is ANNO 1800 at its core, a typical, quite satisfactory game of constant development and balance as the player is pushing the industrial development. 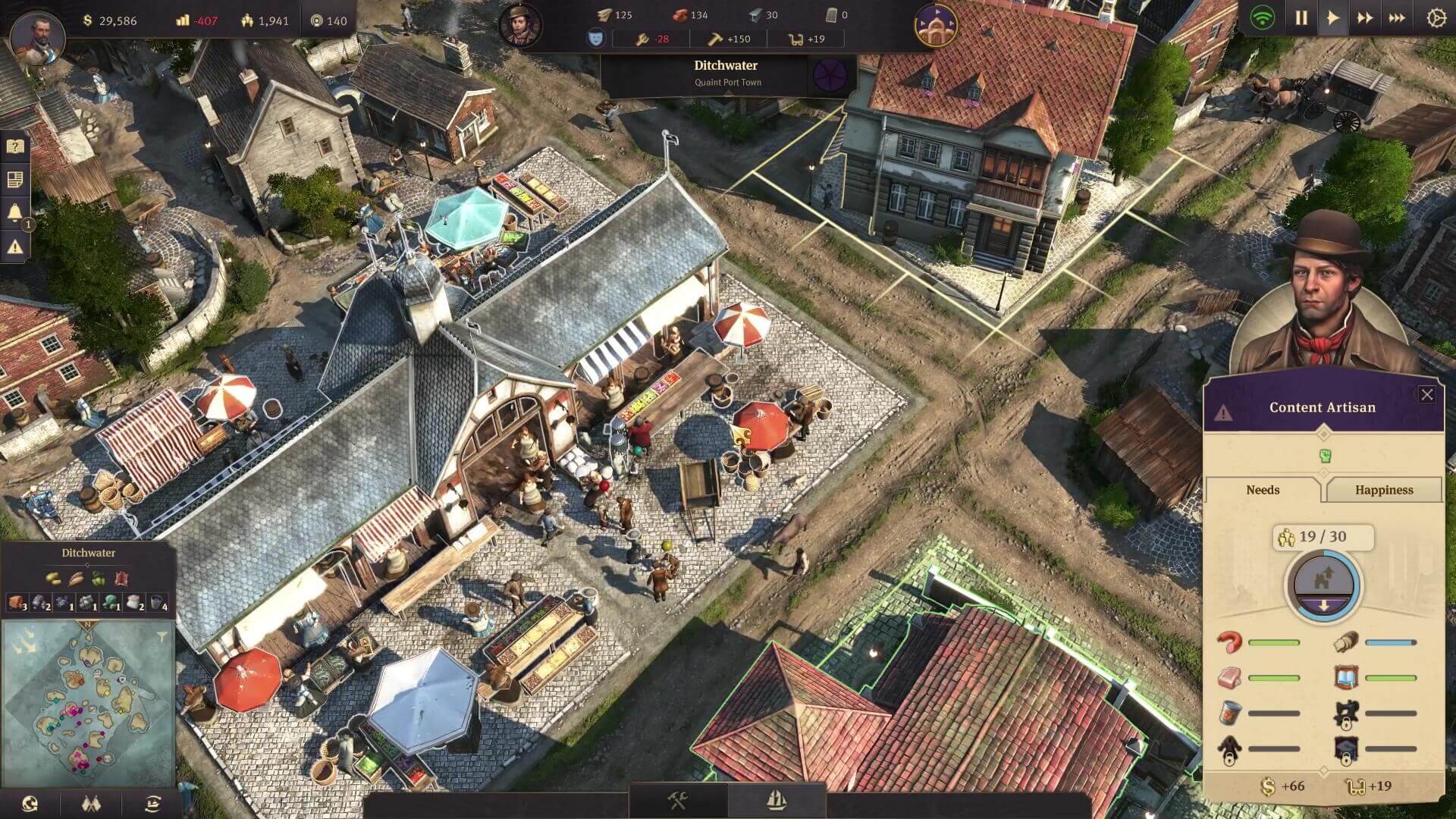 Let us focus a bit on the population in ANNO 1800. The population has two needs in order to advance and properly develop in the game.  The ANNO 1800 population tiers are as follows: farmers, workers, artisans, engineers and investors. There are basic needs such as clothing, sausages, beer and alike, and increase with each level of the population tiers, so that workers will have more basic needs than farmers, and artisans more than engineers. Next to that there are also luxury needs of each population tier that define how happy that tier is. This is optional, as people don’t need to be happy to advance in ranks, but is sometimes very important so that you may avoid riots and population unrest.

In order to advance to the next level of population tier three conditions need to be met: residences must be full, all basic need fulfilled and there must be enough material to upgrade buildings. However, as you expand your island and get more and more requirements for more specialized and educated workforce, you also still need “lower” tiers. If you convert all your farmers to workers, there will be no one to plow the fields. When you convert too many workers into artisans, then the jobs that workers occupy will suffer from shortage of qualified labor. This means that you constantly need to expand the outskirt of your settlements, bringing in new farmers and upgrading existing population to ever higher levels.

You start with a small port and need to build up. It is not always easy to find the perfect layout, but fortunately ANNO 1800 has an experimental building mode that will allow you to place a blueprint of the building(s) and give the building order only if the layout is satisfactory. Also, should you smack an object into the wrong place, you can simply “pick it up” with the hand symbol and drag it to a more desirable location. Every level of your settlement has specific demands that need to be met before either additional buildings within that level can be unlocked or your town advances to the next level. Features such as population size and required numbers of specific population tiers determine your advancement. 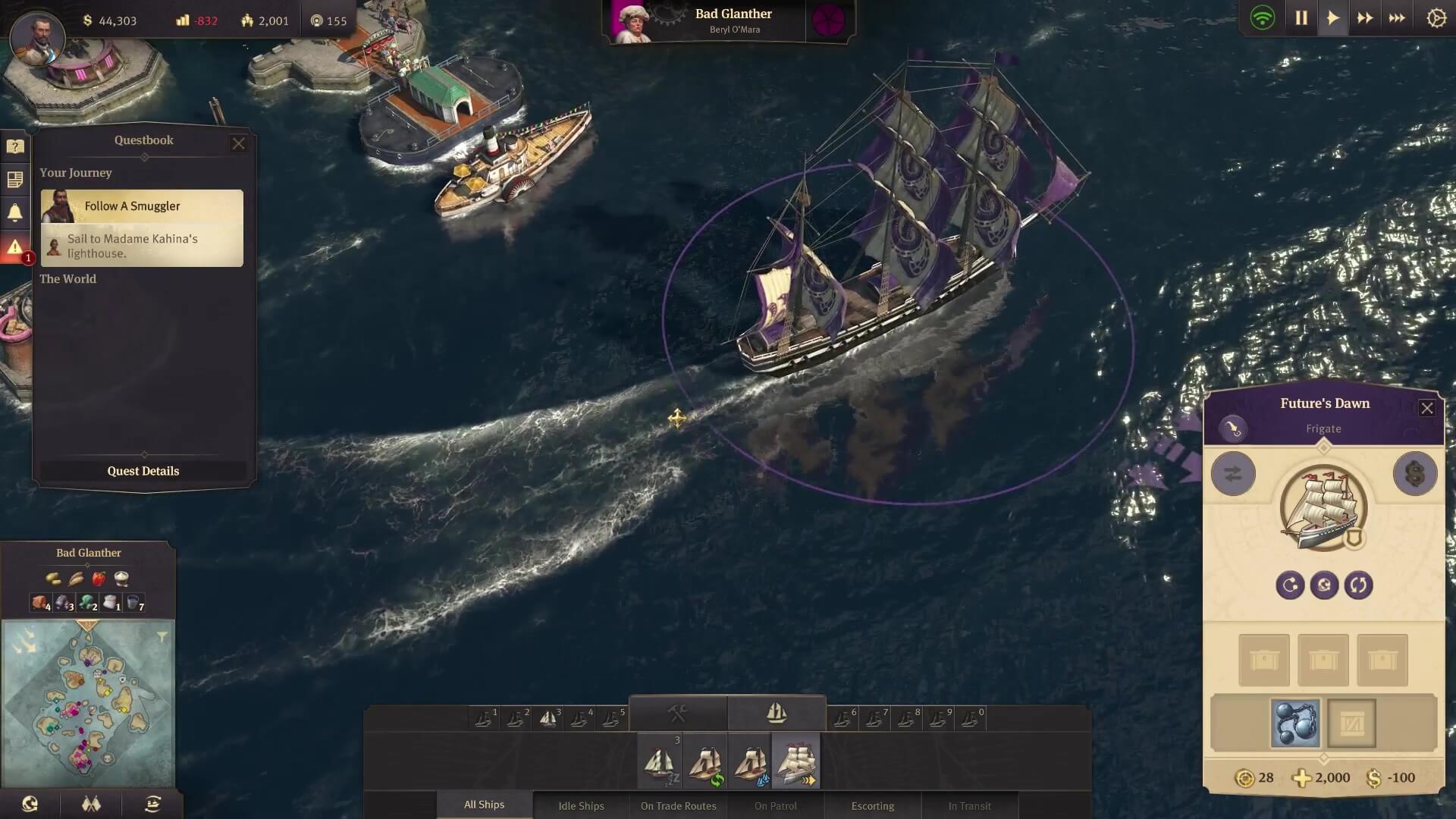 Ships look beautiful and the mechanics are both simple and satisfying

It is not always easy to plan for a perfect, for me even remotely perfect  settlement layout. My buildings are all over the place, sprawling in highly chaotic manner. Not even the tools for rearrangement are good. Many buildings such as the lumberjack huts or wheat farms and require a specific amount of free space around them; it is hard to assess what proper layouts are in order there, but you can do a lot of experimenting on your own. If you are not into it, there are some interesting layouts to be found on the ANNO subreddit.

With each level of the development a new set of resources and production chains will open themselves up, but that doesn’t mean you can ignore the existing ones, since they remain relevant throughout the game. If anything, you need to extend them! In times such as this, reaching out and occupying another island is sometimes the only way out.

There are several key figures in the ANNO 1800 campaign which whom you can engage in rudimentary diplomatic actions. While this is hardly breathtaking, it is actually fairly well done and you can figure out how to get the best possible relations with the people you need to be on good footing for as long as possible. The best part about the diplomacy, though, is the fact that you can turn to any one of the members and ask for quests, which are great way to make money and improve relationship. On the other hand, after having witnessed a pirate ship chasing my schooner into the harbor of my ally and proceeding to shoot my vessel to pieces while the harbor cannons of my ally stood idle by I am not certain if there is much point in expecting even allied ships to help in times of trouble. 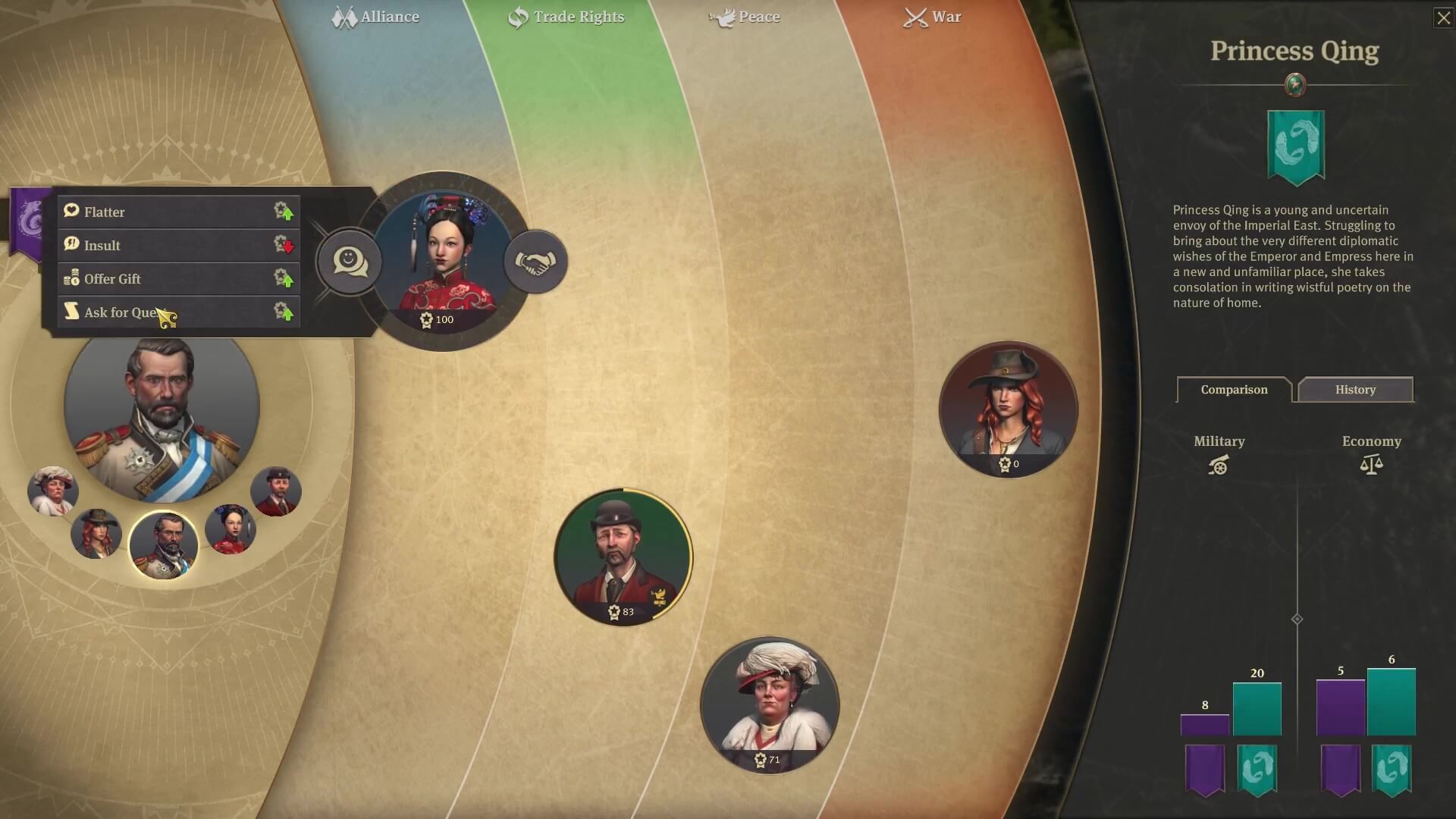 You can’t always be friends with everyone, and rejecting proposals will lose you brownie points

ANNO 1800 did at times irritate me; perhaps due to the fact that it has been a while since I played ANNO series and have simply forgotten some features, perhaps due to the fact that it simply omits pointing you in the right direction at other times. Following the initial campaign I came to the point where I upgraded a portion of the population from farmers to workers but apparently missed out on the part that workers can and need to be upgraded to artisans at some point. Additionally, seeing that to unlock a specific task I needed one single artisan, I believed for a while that artisans would be a more like rare goods and items rather than the next tier of population. On other occasions notifications such as “can’t pick up survivors, cargo hold is full” would prevent more frustrations, and “missing fertility” notification on the paprika farm drove me nuts – luckily, there is Google telling me that not every island in a region is suitable for all crops and that each island’s description shows what will thrive on a specific landmass.

Some things such as aforementioned case where pirates were shooting down my trade ship in the center of an ally’s harbor equipped with guns where AI did nothing are still not clear to me; either this happened through a bug or by design, I am not sure, but I definitely did not like it.

There were also some bugs when it came to completing missions and delivering goods, but luckily not too many. And once you get a hold of how thing function, it is a pretty smooth ride from there on.

Overall I enjoyed my time with ANNO 1800 very much; you can check the Let’s Play Series ANNO 1800 here:

ANNO 1800 is a worthy successor of the series and a very enjoyable game, with only few slight omissions and nothing that truly breaks the fun and immersion. Atmosphere is great, music and sounds fit the surrounding, there is an immense love for detail that went into this game. Overall it is a very good, entertaining game that will certainly provide you with many hours of fun in single campaign and sandbox mode but also in the multiplayer, for which some claim to be one of the best experiences they ever had in the games of this type.